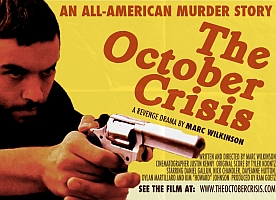 The October Crisis (2012) is a short film with a running time of about 14 minutes, written and directed by American filmmaker Marc Wilkinson, available to view online (bottom of the post or at theoctobercrisis.com) before playing festivals later in the year. The film follows two adult brothers (Nick Chandler and Daniel Gallun), whose much younger brother (Dylan Martillaro) is abused by a priest (Kim Johnson). The elder two struggle over whether or not to take the law into their own hands in seeking a form of justice.

There’s little argument that Wilkinson’s subject may seem rather heavy for a short film; the 16mm production is intended as a calling card to raise interest in a feature version of the story. The presumed compression of a narrative with such moral ambivalence into such a short telling does not leave much room for frills. The gravity of the tone doesn’t do the cast any favours, all of whom seem bound into a sort of fixed, brow-furrowed sobriety. 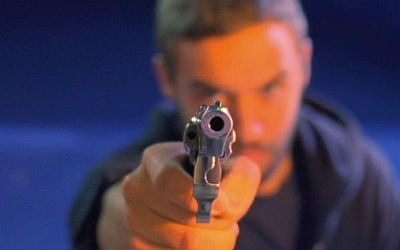 Wilkinson and his cinematographer, Justin Kenney, prove themselves more than adept at producing striking visual composition. The decision to shoot on 16mm rather than digital serves the look of the film very well, with a nice, just-visible grain to the image that adds to the low-key appeal of the short.

While some directors of short films in recent years have produced work which pushes the technological boundaries of what seems achievable in a short, and on a small budget, Wilkinson shows that there is plenty of life left in the short narrative form. Certainly enough to suggest that, given a bigger canvas and better tools, he could really tell a few stories worth watching.

Marc Wilkinson’s The October Crisis is free to view below or at theoctobercrisis.com.