With the much-anticipated The Dark Knight Rises (2012) released in UK cinemas this Friday (20 July), the BFI are running a Christopher Nolan season that includes his directorial debut Following (1998). This little-known 16mm first feature tells the story of a nameless young writer (Jeremy Theobald) with an odd habit of following people around London, collecting material for his book. His harmless pursuits eventually get him into trouble when he meets Cobb (Alex Haw), a debonair burglar who teaches him the tricks of the trade.

This neo-noir experiment holds the juvenile signs of the director Nolan was to become and is a decent, although flawed, mystery-drama. There is a pleasing structural play, where the plot flicks between future and past events, something that would reappear in more sophisticated and better developed form in his second film Memento (2000). The stylised opening, in which the impoverished writer is being interviewed by an unknown old man, also provides a strongly-stylised starting note. 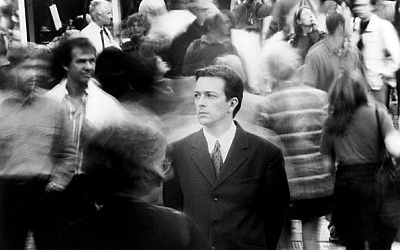 Disappointingly, the weak script and low quality dialogue fail to maintain the mystery throughout and becomes tiresome despite having a run time of just over an hour. Fortunately, Nolan averts disaster by just about holding the plot together and providing a satisfying conclusion in the last moments of the film. Given that Following had a modest budget of only $6000, Nolan succeeds in making a good first feature, capably capturing the streets of London with numerous tracking shots and well-lit interiors.

More pleasing are the skilful close ups of objects and hands that become key later in the story. More problematic is the very weak script hindered all the more by unconvincing delivery from the lead characters, played by Theobald and Haw. At the heart of the film is an exploration of voyeurism; firstly in how the young writer follows strangers; secondly, from Cobb who, at the same time as getting a perverse pleasure from that act of burglary, enjoys discovering details about people’s private lives by going through their sentimental personal objects.

Nolan creates a pleasing parallel and link between the disparate characters, which is ultimately jettisoned in favour of building the mystery and tension to provide a satisfying conclusion. Arguably the greatest enjoyment to be found in Following is to see the seeds of the director Nolan was to become.