Let’s be blunt: Nima Nourizadeh’s Project X (2012) may well be the worst film of the year so far. It opens on a sweater-vested idiot clutching his crotch, singing the lyrics to Hey, We Want Some Pussy before boasting to camera about how wet his dick is about to get. At this point, any doubts you might have had about the juvenile tone of the movie are quickly quashed. Like an unfunny Superbad (2007), the film takes the geeky-virgins-attempt-to-get-laid-at-a-party template of time immemorial, before slapping on the zeitgeist-ridden, frequently derided ‘found footage’ format.

Project X is unsurprisingly produced by The Hangover (2009) director Todd Phillips, no stranger to obnoxious, high-concept, low-integrity party movies. What is rather more surprisingly is that it’s co-written by Michael Bacall, who did a far better job in authentically depicting young people as co-writer on both Scott Pilgrim vs. the World (2010) and 21 Jump Street (2012). It’s since emerged that Project X was conceived during Bacall’s time off from Scott Pilgrim, and it certainly feels like an afterthought – a film forged on the extreme fringes of credulity and morality. 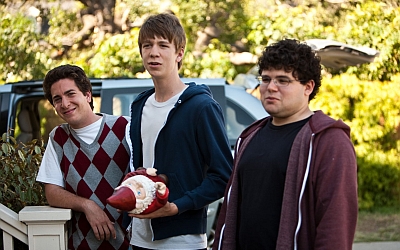 You don’t have to be the world’s biggest prude or a Germaine Greer-level feminist to be offended by Project X and its severely de-magnetised moral compass. The only character any reasonable human would, or could, sympathise with is a young father living opposite who politely requests the party ends as his newborn baby is being kept awake at midnight. Naturally, he’s the elected antagonist, booed off the steps of his neighbour’s house like a pantomime villain – though not before being tasered by a teenage security guard.

Putting aside the pointless found footage format, the toxic misogyny, the lack of any structure or narrative and the absence of even remotely likeable characters, Nourizadeh’s Project X is quite simply not funny – inexcusable for any self-proclaimed comedy. The kindest thing you could say about this pugnacious tripe is that the cinematography is quite good. But then why be so kind about something so pointlessly mean-spirited?