Arriving on DVD this week following a limited UK theatrical release, French director Eric Valette’s The Prey (La proie, 2011) attempts to be a jack-of-all-trades, gritty crime thriller – yet predictably ends up as master-of-none. Part-prison drama, part-police procedural and part-manhunt, Valette’s film is a jumbled mishmash of different styles and sub-genres that sadly feels like it’s making itself up as it goes along.

Albert Dupontel plays convicted bank robber Frank Adrien, currently serving a lengthy sentence for his crimes against society. With limited access to his beautiful trophy wife (Caterina Murino) and mute daughter – as well as exclusive access to some valuable buried treasure – Frank finds himself an easy target for the prison’s top dogs. However, after saving the life of his newly-acquitted cell-mate Maurel (Stephane Debac), a suspected child molester, Frank himself finds his way to freedom – only to find that he’s been double-crossed on the outside. 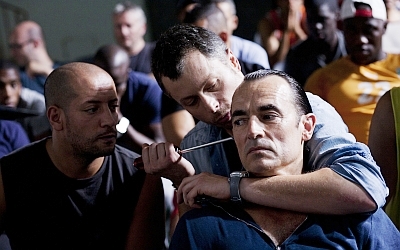 It’s not really a spoiler to reveal that the repugnant Maurel becomes the film’s central antagonist, scrawled as it is through almost every synopsis of The Prey. Neither is this early twist particularly well-executed. Maurel bears all the hallmarks of a duplicitous film weasel; the glasses; devotion to reading; effeminate demeanour etc. By saving his cell-mate’s life during a brutal confrontation with the prison’s alpha males, Frank effectively makes a rod for his own back – it’s just a shame that this particular rod is so constrained by cliché, convention and contrivance.

Most troubling of all, however, is Valette’s scatter-brained direction. Featuring an off-putting, televisual gloss normally reserved for US cable TV cop dramas, The Prey feels more like a French-dubbed episode of Prison Break than a taut, tense product of European cinema. Scenes of hyper-real violence are also often inter-cut with strange, Benny Hill-style shots of Frank almost literally flying through the French countryside. There’s a truly bizarre, surrealistic edge to these moments which are at best, faintly amusing and at worst, downright laughable.

Valette’s The Prey seems destined to vanish into almost instant obscurity, with only its own jarring visual style and trite plotting to blame. You get the very real sense that the director wanted to make two films – one, a tough A Prophet-style prison thriller, the other a Polisse-style procedural drama starring Alice Taglioni’s Detective Linne. Unfortunately, either due to time/budgetary constraints or a sheer lack of narrative nous, what we get is a bland, made-for-TV cut-and-shut job.