At a time when the eyes of the world are glued to the already bustling city of London in the run up to the Olympic Games, the BFI release of the beautifully restored Wonderful London takes a prescient step in the opposite direction, ruminating and exploring a London long embedded in the past. This release comprises a collection of 12 films from directors Harry B. Parkinson and Frank Miller, who created travelogues of various aspects of city life during 1924.

Seen through the sepia-toned eyes of Parkinson and Miller – perhaps Britain’s answer to Auguste and Louis Lumière – these films here are blissful dedications to a city the filmmakers were evidently enamoured with, donning a light-hearted, witty and charmingly kitsch mode of address, perforated by joyously affable inter-titles. Starting the collection is Barging through London, a sprightly excursion that takes you on a trip through working-class London on a barge, starting at the Regent Canal Dock in Limehouse and ending at the Paddington Basin just off Edgware Road, alighting at Camden and King’s Cross along the way. 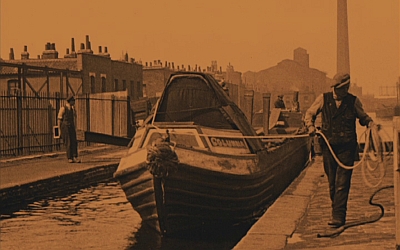 Similarly exploratory is Cosmopolitan London, which observes the cultural vastness of London by travelling through its foreign underbelly, taking in the culinary presence of France, Spain, Portugal and Greece that, as Parkinson and Miller advise, are easily found if the casual Londoner chooses to transcend the sameness of his surroundings and invest in a ‘two-penny bus ride’ around the corner. The ethnic boundaries of the city are also hinted at, as, stumbling upon “a notorious café bar in the unsavoury Whitcomb Street district”, we glimpse at an establishment, “famous for its negro clientele”, as it actively refuses white customers.

Perhaps the best of the bunch is London’s Sunday, which examines the endless possibilities of the weekday worker escaping “that sardine feeling” and enjoying their day off over the weekend, which culminates in one of the most melancholic of the filmmakers’ shots, depicting two lovers atop London Bridge. “Evening falls, and the London Lovers come into their own…Even Fleet Street becomes love lane…While London Bridge is paradise now”, says the lyrically worded inter-titles. Illustrating its lively culture, the bustle of commuters and the air of frenzy one feels when wandering around the city, watching this collection of films makes you wonder how Parkinson and Miller would go about capturing such contemporary landmarks as the London Eye and the Gherkin.

The films of Parkinson and Miller are minutely extensive, and the BFI have succeeded in creating a timeless collection. Coupled with an insightful and lavishly collated booklet with thoughtful essays by London-based academics such as Iain Sinclair, Jude Rogers and Sukhdev Sandhu (as well as The BFI National Archive’s silent film curator Bryony Dixon), Wonderful London represents a lovingly restored artefact of British cinema – as much a joy to watch as a treasure to behold.