The sci-fi cult classic Quatermass and the Pit (1967), directed by long-time Amicus and Hammer director Roy Ward Baker (who sadly died last year) and written by Nigel Kneale (who wrote the recent Quatermass Experiment staring Mark Gatiss), is at last being rereleased in cinemas this week via StudioCanal – which should be joy to the ears of those who love all things Hammer.

During an archaeological dig at Hobbs Lane, London, Dr. Matthew Roney unearths a strange artefact that appears to have a strong psychic effect on those who come into contact with it. The military are called in, believing it’s an unexploded bomb from the war. However, Professor Bernard Quatermass and Dr. Roney believe it to be an ancient Martian spaceship that may hold the secrets to the evolution of mankind. This masterpiece of archetypal Hammer stars many of the great actors of the day including James Donald, Andrew Keir and Julian Glover (the man best remembered as the menacing Walter Donovan in Indiana Jones and the Last Crusade [1989]). 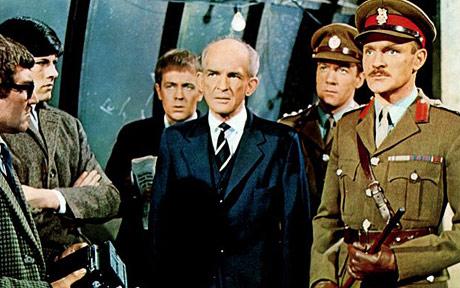 Quatermass and the Pit is quintessential British sci-fi at its very best and gives a wonderful insight into a massively influential stage in the genre’s history (it was a massive influence on cult TV series Dr. Who). The mixture of classic horror and sci-fi blends extraordinarily well – think Edgar Allen Poe meets H.G. Wells, dipped in 1960s psychedelia.

Uninitiated viewers may find the dated effects laughable and some of the acting rather clichéd, but to criticise the film on this basis is to fail to understand the genre – the dodgy effects, screaming women and hammy acting are part of the fun. There is scope for a serious reading of Quatermass and the Pit – anything that talks about human origins could happily spark a Dawkins vs. Christianity debate – but this would run the danger of missing the pleasure this genre of film can bring.

The disbelief from the military characters set against the ultimate conviction of Professor Quatermass is excellent, the bullish Colonel Breen (Glover) acting as the perfect foil for the garden-shed eccentricity of science boffin Quatermass (Donald). Quatermass and the Pit may not be a terrifying film, but it will rekindle those feelings of wanting to hide behind the sofa when you first saw the Daleks come on the telly.