Lauded by a growing number of critics as Italian master Michelangelo Antonioni’s magnum opus, the visually arresting Red Desert (Il Deserto Rosso, 1964) returns for a limited UK cinema run this week thanks to yet another exquisite BFI restoration, whilst also marking the 100th anniversary of the auteur’s birth. Starring Antonioni’s muse and wife Monica Vitti, his award-winning first true foray into colour filmmaking is a dreamlike drama embedded with anxieties relating to the protagonist’s own inter/intra alienation.

Vitta stars as Giuliana, a fragile, worry-ridden young mother who feels unable to connect with either her husband Ugo (non-professional actor Carlo Chionetti) or the wider community of the barren satellite town in which they reside with their son Valerio (Valerio Bartoleschi). Finding solace in the arrival of her husband’s new colleague Corrado (Brit actor Richard Harris, dubbed throughout), Giuliana attempts to overcome her crippling angst, yet remains tormented by a series of intangible, undefinable fears. 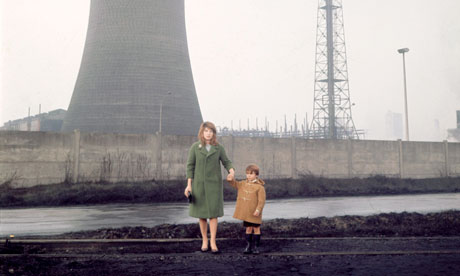 Functioning as a perfect pre-cursor to his break-out 1966 hit Blow-Up, as well as an exemplary piece of filmmaking in its own right, Red Desert sees Antonioni at his most sombre and reflective, utilising vast, almost alien landscapes to complement and extenuate Giuliana’s internal discombobulation. Comparisons can comfortably be drawn with apocalyptic wastes of Andrey Tarkovskiy’s Stalker (1979), with both filmmakers excelling in their desire to link together great expanses with minuscule introversion.

There’s not question that Vitti is the star of this particular show, effortlessly unravelling before the audiences eyes, unable (or unwilling) to firmly grasp the curtains of reality and either open them wide, or close them indefinitely. Like a caged canary, Giuliana craves for a life somewhere else – anywhere else, one suspects – but has become entrapped and enslaved by the poisonous fumes that surround her very existence. Harris is far from the traditional ‘knight in shining armour’, yet brings the same rugged physicality that so impressed Antonioni after watching his turn in Lindsay Anderson’s This Sporting Life (1963).

Now more vivid and evocative as ever before, Antonioni’s 1956 Golden Lion winner Red Desert is a silent finger up to all those that attempted to shoe-horn the man into neorealism for his entire career. Unlike his melancholic protagonist, Antonioni successfully managed to break free of his specific shackles, creating along the way some truly remarkable cinematic gems.