Released in UK cinemas this week, Essex-born filmmaker Dan Turner’s The Man Inside (2012) is a gritty urban thriller which, whilst packing a punch, misses its target once too often. Set on the mean streets of 21st century London, the story concerns Clayton (played by UK rapper Ashley ‘Bashy’ Thomas), who as a child was a witness to both gang-related violence and murder courtesy of his brutally abusive father Eugene (David Harewood). Struggling to come to terms with his tragically troubled upbringing, Clayton channels his aggression into boxing, aided by his coach Gordon (Peter Mullan). Clayton strives to support a young family as best he can. 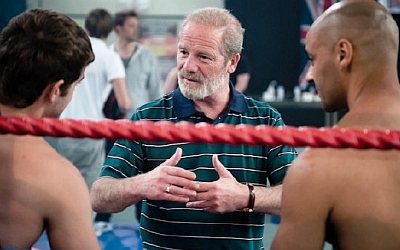 However, when the violence of the city starts to affect their lives, Clayton’s world swiftly unravels and he finds himself forced into the unenviable task of asking for the help of his estranged father. Redemption, it seems, is also a dish best served cold. Clayton’s perpetual struggle with his own identity and his conflicted paternal relationship both make for engaging viewing, with Turner’s screenplay best when focused upon the results of an abusive childhood. Thomas captures the contained rage of Clayton well, bubbling just beneath the surface, accompanied by the terror of his violent father. The cast is bolstered further by a host of TV and film stars, including Michelle Ryan, Jason Maza and Theo Barklem-Bigg.

Whilst there are many admirable aspects to The Man Inside, there is very little here that actually feels original. This urban drama/thriller feels perfunctory, mechanically ticking boxes without bringing anything fresh or innovative to an extremely crowded table. Turner has written an essentially interesting story, yet far too much is left underdeveloped. The central idea of a man overcoming adversity with the mild peril of whether he will succeed or fail generates just enough momentum to keep you watching, but lacks the necessary bite to make it truly gripping.

In essence, Turner’s The Man Inside does little more than adequately develop and portray its central themes. Yet despite an overbearing feeling of mediocrity, this calling card piece will surely find some form of audience amongst those who feel that this story of adversity speaks to them on a deeper, more personal level. Whether they’re willing to pay the standard price of cinema admission is perhaps the more pressing issue.