Romanian director Florin Serban’s If I Want To Whistle, I Whistle (2010), based on the play of the same name by Andreea Valean, tells the story of Silviu (George Pistereanu), a young offender coming to the end of his four-year prison sentence. Silviu’s younger brother, whom he has raised in the absence of their mother, informs him that their mother has returned and wants to take him to Italy. Distraught at the idea of losing his sibling, Silviu attempts to find a way to keep him in the country until his release.

Silviu, like many of his fellow inmates, is at the stage of becoming a man whilst in prison. Yet unlike his fellow cons, he still possesses a boyish innocence, inferred by Serban’s close-ups of Pistereanu’s soft eyes. Silviu is by no means a soft touch however, shown in his bullish manner and an ever-present undercurrent of bubbling anger. His rage at his situation makes for an intriguing central character, continually in conflict with himself, as he desperately attempts to contain his fury. 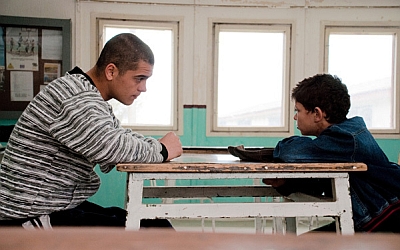 As strong as Pistereanu’s performance is, he is let down by a slightly underdeveloped screenplay which fails to provide a fully-developed character (true of all roles in the film). Serban works hard to describe what is happening, but without much concern as to why the people behave the way they do. It is assumed that their situation is enough to convince audiences of their frustration, but without background and exposition the characters are merely fleeting shadows on the screen.

Equally problematic is the fact that the quiet, subtle drama of If I Want To Whistle, I Whistle’s first act is abandoned in favour of melodrama as we reach its climactic crescendo. As the film draws towards its inevitable conclusion, the reactions of Silviu appear woefully disproportionate because we simply know too little about him.

This is only the second feature from Serban, and there are signs of great promise. Sadly, on this occasion, the Romanian filmmaker struggles at times to open up a cinematic story from the play, leaving audiences with an atmospheric, engaging, yet flawed prison (melo)drama.