International bestselling author-come-screenwriter Nicholas Sparks has made a name for himself over the last few years as his novels have one-by-one been turned into lachrymose-heavy romantic comedies, from The Notebook (2004) to Dear John (2010) and The Last Song (2010). Thankfully, the latest adaptation of his work, Scott Hicks’ The Lucky One (2012), is a noticeable improvement over previous efforts.

This latest story centres on Logan (Zac Efron), a US Marine who stumbles upon a picture of an unknown woman during a tour of Afghanistan. This photo becomes something of a good luck charm, keeping him alive as other members of his unit fall around him. On his return to America, he ventures across to North Carolina in a bid to thank the woman, whom he discovers to be Beth (Taylor Schilling). When he struggles to find the words to tell her, however, they instead become friends, and subsequently lovers. 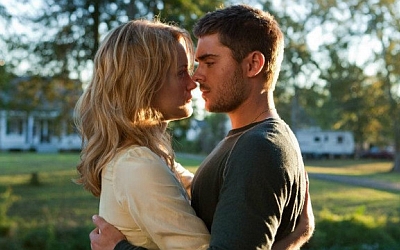 In all honesty, there’s not much in Will Fetter’s screenplay to differentiate The Lucky One from other films of its ilk, nor make it one that’s a particular must-see. It’s packed full of cheesy dialogue, has all the stereotypical characters (green-eyed ex-husband, sentimental grandmother and insecure child, to name but a few) and is brought to an overly-optimistic and cheery conclusion in such a way that makes everything that’s come before it almost entirely pointless.

That said, there’s an air of warmth infused through Hicks’ direction that allows The Lucky One to shine in all the right places. The framing, in particular, is a strong point. Light and tender (the carelessness that comes in the early days of Logan and Beth’s relationship), but never afraid to be tough where and when necessary (the fiery showdowns lead by Beth’s ex-husband Keith). However, it’s the way in which Logan and Beth’s burning passion is represented through the clever use of natural light that benefits this latest Sparks adaptation most.

The film’s performers don’t always succeed, but it’s never due to lack of effort. Efron is an easy fit as Logan, proving himself a dab hand at handling more dramatic material, but never elevating the role to particularly noteworthy heights. Schilling similarly offers decent support as Beth, with the chemistry she shares with Logan more authentic than you may expect. Whilst reluctant to push the generic boat out, The Lucky One is heart-warming in all the right places, well-acted and even shows that not all Sparks adaptation have to be horrifyingly corny.