The inaugural series of AMC’s The Walking Dead (2010) was a refreshing, but often slow and frustrating adaptation of Robert Kirkman’s award-winning comic book series. For some viewers, the lethargic pace and lack of character development proved to be too much of an obstacle. However, those faithful souls who endured until the climatic destruction of the CDC Laboratory at the end of Season One were undoubtedly moist with anticipation for the Second Two – now released on DVD and Blu-ray.

Rick Grimes (Andrew Lincoln) and his band of fellow zombie plague survivors chance upon an isolated farm owned by aged veterinarian Hershel Greene (Scott Wilson). Grimes and the gang decide to hole up with Hershel and his family, but soon enough, the secrets, lies and power struggles threaten to shatter this already shaky alliance. 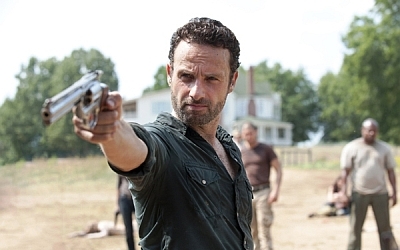 Frank Darabont’s decision to take a more dynamic role in Season Two’s writing and development has definitely paid dividends. The pace might still be a touch too languid and the focus is still primarily on Grimes, but the rest of the ensemble are fleshed out and given ample time to develop their characters. The burgeoning rivalry among Rick and Shane (Jon Bernthal) for the affection of Lori (Sarah Callies) and the mantle of leadership is the main thread of the series, and Bernthal certainly impresses as the jilted lover – driven insane by love and circumstance.

Lori enraged some die-hard fans of the first series, who accused her of being ‘annoying’, but although Callies and the other female cast members are overshadowed by the dominant males, her Lady Macbeth scene midway through the series sets up the potential for intriguing character developments in Season Three. It’s undeniably our very own Lincoln who shines brightest, however. The inner turmoil, pressure and emotional stress are etched upon his face but, as soon as you think you know Rick Grimes, he turns around and surprises the living Hell out of you.

Gore-hounds will not be disappointed as the violence against the zombie ‘Walkers’ becomes increasingly savage, and there are plenty of layers to peel back and explore should you wish to write an essay on the subject of Atheism or moral ambiguity. The show occasionally slips into soap opera mode but, if you like your US TV series tense and your guts bloody, The Walking Dead hits all the right notes.