Following on from the success of Another Earth (2011), Brit Marling stars in Zal Batmanglij’s Sound of My Voice (2011). Once again credited as writer and producer, Marling continues to enhance her burgeoning reputation as one of America’s most promising stars. Ordinary couple, Peter (Christopher Denham) and Lorna (Nicole Vicius) turn into investigative journalists in an attempt to create an expose documentary about a neighbouring cult that has began to grow a fervent following.

The duo attempt to infiltrate a mysterious group, who has become enraptured by an enigmatic and mysterious leader called Maggie (Marling) who claims to be from the future. As the pair delves deeper into this clandestine sect they begin to wonder if Maggie is the charlatan they initially believed her to be, or just possibly, really sent from the future to save them. 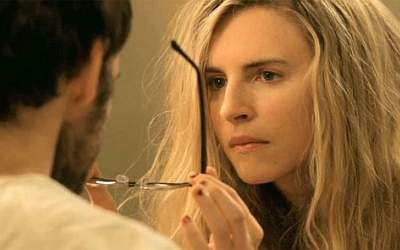 Marling undeniably steals the show as the film’s mysterious antagonist, with her strikingly assured demeanour perfectly in keeping with her role as this manipulative head of a surreptitious organisation. Seamlessly transforming from a blonde-haired Aphrodite to an intimidating, persuasive and subtly domineering luminary, Marling demands the attention of her devoted followers but the audience as well. Batmanglij matches Marling’s confident authority with some transcendent camera work that encapsulates the film’s claustrophobic and disconcerting tone.

Sadly, despite its commendably ambitious approach, Sound of My Voice never quite fuses its enticing premise and lyrical aesthetics with its fractured narrative structure. Asking far more questions than its prepared to answer, it doesn’t take long for the air of intrigue which materialises around Marling’s furtive Maggie to quickly fade away, with the audience slowly realising that the film’s attempts to creative a thought provoking feature may in fact be masking the filmmaker’s own ineptitude to concoct a satisfying conclusion.

Hindered by an unnecessarily disjointed script and a lack of any tangible narrative hooks for the audience to become completely immersed within, Sound of My Voice is a promising piece of provocative cinema which, due to its numerous plot holes becoming overshadowed by its wonderful story and memorable performances, works far better in retrospect than it does on initial viewing.