From cult figure Seth MacFarlane, the creator of Family Guy and American Dad, comes Ted (2012), a somewhat predictable cavalcade of pop culture references and crude humour masquerading as a bromance between a middle-aged man and his boyhood teddy bear. Starring Mark Wahlberg, Mila Kunis and MacFarlane, Ted is everything you’d expect from the architect behind one of this generation’s most controversial TV shows.

Conceived through a hopeful, yet inexplicably fruitful childhood wish, oversized toy bear Ted (MacFarlane) miraculously came to life and quickly became the best friend to 8-year-old John Bennett (Wahlberg). After a childhood of fleeting stardom, John and Ted soon found themselves in their thirties, living a dreary life consisting chiefly of getting high and watching old 1980s films. However, despite being as close as ever, their relationship is tested when Lori (Kunis), John’s girlfriend of four years, begins to insist on more of a commitment from their blossoming relationship. 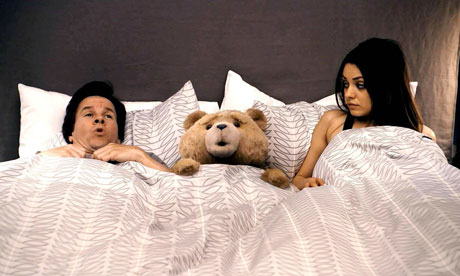 After an electrifying opening that recalls the magic and wonderment of the greatest Christmas films, Ted quickly descends into a repetitive series of immature and unintelligent jokes with varying degrees of success. The familiar narrative framework – a man-child unable to relinquish himself from his childhood – feels extremely tired and hackneyed, leaving little of interest for anyone who isn’t an ardent fan of MacFarlane’s previous work.

Indeed, it’s the film’s subjective humour which dictates your overall enjoyment of Ted. As the film’s finale nears, its bawdy comedy diminishes into a series of juvenile gags that become increasingly banal. Yet whilst MacFarlane may have failed to expand upon his limited creative canvas, that’s not to say there aren’t any snippets of enjoyment to be harvested from his latest outing. Certain scenes are satisfyingly witty, including John’s rapid-fire recital of trailer trash names, Ted’s unconventional string of job promotions and a delightful cameo from an icon of 80s cinema.

Ted is a perfectly enjoyable slice of contemporary comedy that manages to raise its head above the faecal pond of modern crude comedy. Yet, like its strangely engaging protagonist, behind its lovable façade lies a vacant, lifeless and brainless corpse stuffed with more than a little superfluous filler.