How does a Bourne sequel work without Matt Damon’s titular, superhuman Jason? This is the challenge faced by screenwriter Tony Gilroy, who replaces Paul Greengrass in the director’s hot-seat for this year’s franchise reboot/sidequel The Bourne Legacy (2012). With Jeremy Renner now centre stage as Bourne’s fellow test guinea pig Aaron Cross, Gilroy orchestrates an enjoyable action flick, albeit one lacking in the gusto and smarts of the previous three series entries.

Neatly placed half-way through the events of 2007’s The Bourne Ultimatum, we learn that black-op military projects Treadstone and Blackbriar were merely the tip of the iceberg. Operation Outcome is the latest upgrade of supersoldiers headed up by Eric Byer (Edward Norton), the man responsible for the CIA’s clandestine operations. Fearful of the threat of exposure, Byer decides to dispose of all of the the agency’s assets – including the aforementioned, highly-trained Cross (Renner). 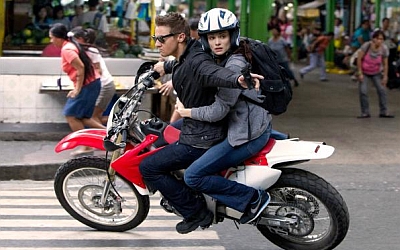 “How doesn’t really matter, does it?” states Norton’s Byer at one point during the film. His words aptly sum up the success level of The Bourne Legacy, which adopts all the necessary qualities of a thrill-ridden action movie, but is less worried about developing character motivation. There are suitable MacGuffins at work driving the plot forward, which in one case leads to a relationship with Dr. Marta Shearing (Rachel Weisz) (who we know is a scientist because she keeps stating “I know science” every five minutes). This exposes some of the rather clumsy dialogue that befits a weak Bond rather than a Bourne effort.

The Bourne Legacy distinctly lacks the post-Cold War paranoia so well captured in the previous three franchise entries. This is in partly down to the fact that it is built around an original story courtesy of Gilroy, who opted not to draw directly on one of Bourne creator Robert Ludlum’s texts. It’s a sensible choice in many ways, giving a fresh feel to the franchise whilst knitting itself into the previous story of Jason.

Gilroy has succeeded in creating a proficient Bond/Bourne mash-up, that whilst losing some of the grit of the previous three creates a lighter, still intelligent and altogether enjoyable action film that makes the best of its strong cast. Thankfully, Aaron Cross is no simple Bourne carbon copy, featuring light touches of humour and a great deal more empathy which Renner carries off well.