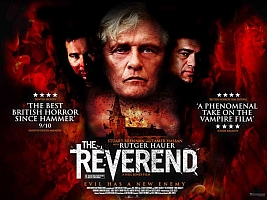 You could be forgiven for thinking that a film entitled The Reverend (2011) would be a life affirming experience. Unfortunately, the new indie Brit horror written and directed by Neil Jones and starring Stuart Brennan, Tamer Hassan, Rutger Hauer and Doug Bradley is devoid of any such saving grace – sitting through it is an endurance test akin to penance.

A new reverend (Brennan) finds himself sent to minister unto the local flock of an idyllic rural community. Unfortunately, first appearances can be deceptive, and the eager young priest soon discovers that brooding tension and horror simmer just below the surface of this outwardly bucolic setting. Local bigwig Harold Hicks (Hassan) has a sinister stranglehold over the local inhabitants, whilst there’s trouble brewing in a neighbouring estate – a place that no-one with any sense, least of all a man of the cloth, would dare venture. 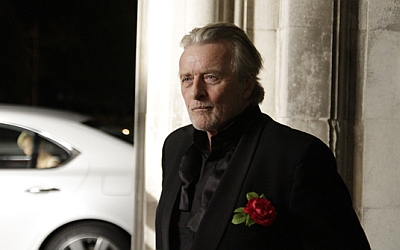 There has been incessant delight since the early days of cinema for committing comic book characters to the big screen – take for instance Hollywood’s interpretation of Flash Gordon and Tarzan during the 1930s and 40s. It would appear though, with what seems a like a new superhero unleashed on the big screen every other month, that inspiration is running dry. For surely there can be no other explanation for this lifeless celluloid version of The Reverend, a comic-strip story whose main character is a vigilante, vampire vicar.

Nothing about this ‘bloody’ mess works, from the foul mouthed characters like the female parishioner who sweetly welcomes the new minister to the village only to come out with a string of expletives for which she is constantly apologising, to the host of delinquents including a nasty pimp played by EastEnders star Shane Richie and a brief appearance by the legendary Hauer (are times really so tough that he’s reduced to this?).

Even the hope of a beautiful countryside location proves short-lived, once The Reverend’s action moves inside through an array of miserable and one dimensional internal settings. Supposedly based on the biblical tribulations of Job, it would take a miracle or the saintly patience of that Old Testament hero to see this unholy concoction through to the end.