Back in 1990, ‘Austrian oak’ Arnold Schwarzenegger hit our screens as the mind-muddled Douglas Quaid in Paul Verhoeven’s Total Recall, an adaptation of the Philip K. Dick sci-fi novel We Can Remember it for you Wholesale. Now, Hollywood hack Len Wiseman has undertaken the challenge of remaking the original cult sci-fi classic, with a decent cast including Brits Colin Farrell and Kate Beckinsale.

On a near-future Earth ravaged by global biological warfare, only two territories remain fit for life; the authoritarian United Federation of Britain – ruled over by the dictator-like Cohaagen (Bryan Cranston) – and the neon-lit, slum-world of the Colony. Living in the Colony is Quaid (Colin Farrell), an honest worker who, despite being married to his beautiful wife Lori (Kate Beckinsale), is tired of the drudgery of his daily life. Sick of the monotony, Quaid decides to visit Rekall – a place where he can have his wildest dreams implanted as memories. However, during the visit something goes awry and Quaid discovers that there may be more to him than initially meets the eye. 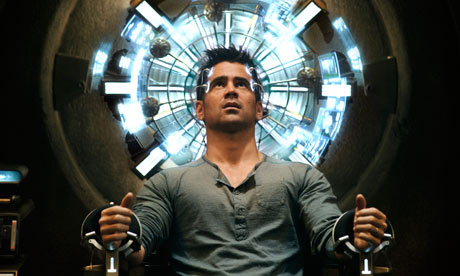 With his vision of Total Recall, Wiseman has attempted to have some fun with audience expectations, manipulating some of the most memorable scenes of the much-loved 1990 original (including a certain three-breasted woman). However, such moments provide a level of enjoyment that is unfortunately not replicated throughout the rest of the movie – despite its notable efforts. Verhoeven’s ultra-violence has sadly been replaced with PG-13 fight scenes, whilst Beckinsale’s Lori – a more significant character than Sharon Stone’s ‘blonde’ – still spends most of her time stuck in a cycle of dull chase sequences.

As Quaid, the ever-likeable Farrell makes for a compelling protagonist, played with far greater believability than the Arnie incarnation (if a lot less fun). Unfortunately, the rest of the film struggles to match the quality of its amnesiac lead. Whilst the action is grand in scope – and certainly high in production values – it somehow lacks any tangible sense of tension or drama. The central problem with this somewhat unwarranted (and unwelcome) remake is perhaps the fact that whilst Wiseman has created a good-looking sci-fi, it lacks the all-important crucial ingredient – the satirical/political edge of Verhoeven’s inaugural effort.

Whilst visually alluring, there seems to be almost nothing in Wiseman’s Total Recall that we haven’t already seen before, with the set and costume design at times resembling a messy mash-up of I, Robot (2004), The Fifth Element (1997) and Ridley Scott’s masterful Blade Runner (1982). Ultimately, once Wiseman’s film reaches its ludicrous final scene, audiences could be forgiven for wondering exactly why a remake of the 1990 original was necessary in the first place.