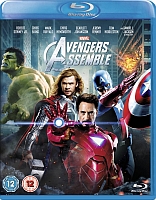 ★★★★☆
Lining itself up against the might of both Christopher Nolan’s Dark Knight and Marc Webb’s Spider-Man reboot this summer, Joss Whedon’s Avengers Assemble (2012) defied even the most optimistic of expectations by delivering a faithful, witty superhero ensemble piece that helped to erase memory of some of Marvel’s less accomplished recent outings. Successfully bringing together the ‘World’s Mightiest Heroes’ for a sci-fi spectacle (with shawarma), Whedon’s joyful romp now makes its way to DVD/Blu-ray this week. 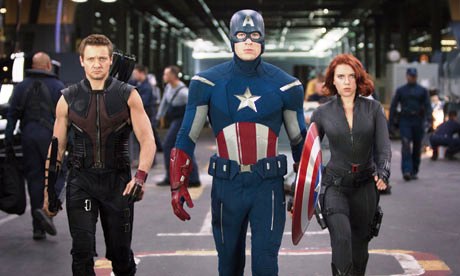 Unlike Nolan’s somewhat po-faced (though undeniably compelling) Dark Knight trilogy or Webb’s angsty new web-slinger, Whedon’s Avengers Assemble shades its two competing franchises in terms of pure, popcorn-scoffing enjoyment. Cartwheeling across that giddy tightrope between thrills and laughs, Whedon’s superhero saga never takes itself too seriously, more than aware of how anachronistic some of its number have become in the last 30-or-so year (personified in Evans’ old-fashioned ‘Capsicle’, a trading card icon reborn).

Team chemistry is what sets any ensemble piece aside from the chasing pack, and Buffy/Firefly scribe Whedon clearly has past form at bringing together the universe’s moodiest misfits together on-screen. As witnessed in the soon-to-be-completed Iron Man trilogy, Downey Jr. is the perfect Tony Stark, a mega-minded, billionaire narcissist who admittedly “doesn’t play well with others”. Matching Downey for charisma is the always watchable Ruffalo as the haunted Bruce Banner/”The Other Guy” and Hemsworth’s Thor, who somehow manages to snag several of the film’s best one-liners. The rest of the cast are more than comfortable in their respective roles, with little or no redundancy.

Those looking for Batman-levels of dark dystopia will be better served by Nolan’s now-completed cycle. Yet Whedon’s Avengers is almost entirely unapologetic in its blockbusting, mainstream ambitions, providing the very type of Hollywood behemoth capable of transforming fanboys/girls and franchise newcomers alike into awe-inspired, grown children. Despite strong competition from DC, 2000AD and fellow members of the Marvel stable, Avengers Assemble is just about the best comic book adaptation released so far this year – and arguably the most enjoyable of the summer blockbusters.