Jason Segel, the epitome of the perennial ‘man-child’ type currently prevalent in American cinema, sums up and validates the persona as the eponymous Jeff, Who Lives At Home (2011), the latest offering from the Duplass brothers. After answering what seems to be wrong number call on the house phone, Jeff, who does indeed live in his mother’s basement, follows the signs that appear in his life in the hopes of discovering his destiny.

The mission that Jeff becomes absorbed in encompasses his brother Pat (Ed Helms), whose marriage to Linda (Judy Greer) is on the ropes, and their mother Sharon (Susan Sarandon), who is exasperated with her two sons and longs to escape from her disappointing life. Jeff is inexplicably a big fan of M. Night Shyamalan’s alien-invasion movie Signs (2005), marvelling at the way the film’s apparent meandering coalesces into what he calls a “perfect moment” to resolve the story. 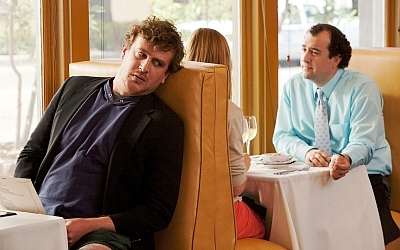 What Jeff is really enamoured with is structure and meaning, the two things which are evidently missing from his own life, fossilising as he is on the sofa. Most fiction films make use of this governing structure, but Jay and Mark Duplass’ Jeff, Who Lives At Home uses it to make a point about the differences between reality and the contrivance of narrative form, particularly in relation to ideas of fate and existentialism.

Helms, Sarandon and Greer do just fine their roles, but it’s Jason Segel who owns the film. Segel has already had an excellent year, kicking off with the UK release of The Muppets (2011), and following up with the excellent The Five-Year Engagement (2012), a romantic comedy of superior wit and intelligence. He is on winning form here, a warm, engaging and almost-wise presence on the screen. Despite his comedic moments, Segel never plays Jeff as the comedy; the laughter is drawn from Jeff’s situations and observations.

The brothers Duplass’ Jeff, Who Lives At Home is surprisingly sincere, deeply human and genuinely very funny. Earlier this year, Mark Duplass starred in Lynn Shelton’s comedy-drama Your Sister’s Sister (2011), a film which seems like a suitable point of comparison for the gentle, heartfelt tone of both movies. Jeff… is similarly possessed of a thoroughly decent approach to its characters – who feel exceptionally well-drawn – and it all comes together for a satisfying, emotionally uplifting finale; one of Jeff’s ‘perfect moments’.

Win a DVD copy of Jay and Mark Duplass’ Jeff, Who Lives At Home with our brand new competition. Follow the link to enter.