In an opening monologue, renowned performance artist Marina Abramović tells us that for decades she has been thought of as insane, and only now does she feel sufficiently recognised. It’s a statement that not only capitulates the film’s central question – what is art? – but also clues viewers in on the self-involvement ahead in her unavoidably pretentious, nevertheless thought-provoking documentary, Marina Abramović: The Artist is Present (2012).

Following Abramović’s 2010 exhibit of the same name, we observe the preparation and unveiling of her latest performance piece, in which she spends two-and-a-half months sitting in a chair at New York’s Museum of Modern Art. To many, the piece is a work of visionary genius, an ultimate artistic expression which serves to hold a mirror up to ourselves, whereas others have freely dismissed it as anti-art. Though the film is naturally pro-Abramović – and marches out a cavalcade of art critics and try-hard students to defend her position – it is at least far-sighted enough to highlight the opposing viewpoint, if rather lazily misrepresenting it via asinine Fox News anchors. 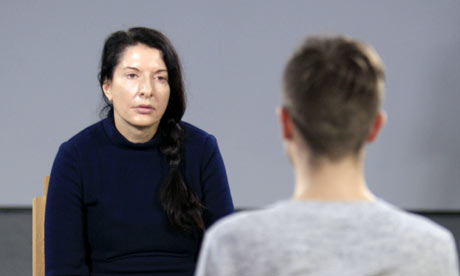 While broaching its overarching quandary with only limited success, Abramović’s secondary goal – to keep dwindling performance art alive – is a more admirable one, and regardless of viewer perception of this particular piece, it is easy to glean the contemplative and cathartic qualities that these works can provide. A shame it is, then, that directors Matthew Akers and Jeff Dupre mostly focus on idolising their subject, stagily shooting her staring out into beautiful vistas, while compounding her apparent excellence with the words of fawning fans and critics (one critic laughably refers to her marriage as “one of the great love stories”).

Abramović is unquestionably a confident artist, and frequently plays up to the camera here; her life, it appears, is a performance itself, and perhaps aptly so. Some of the best moments occur when she’s simply sat in a chair, and allows the general population to chime in; arguably the most interesting moment occurs when her ex-husband turns up at the exhibit and takes a seat opposite her. However, the montages of people reduced to tears by her work feels overwrought and quickly becomes tiresome, underlined by the unintentionally amusing preciousness of the work, and the absolute seriousness with which both documentary and subject take themselves.

Ultimately, Marina Abramović: The Artist is Present’s insights into art’s capacity are genuinely interesting, if not a might as involved as something like Exit Through the Gift Shop (2010). Perhaps most significantly, Abramović herself remains a captivating, if maddening figure.