Taking an a tried and tested theme has never been so stilted and unexciting as it is in Peter Næss’ Cross of Honour (Into the White, 2012), an amiable enough film that unfortunately does very little with a potentially gritty story. Inspired by true events, the film examines the unanticipated friendships formed between a group of five disparate individuals, set against the backdrop of the Second World War.

Set in the winter of 1940, a time that saw both Britain and Germany attempting to conquer Norway in order to gain control of the country’s iron ore export, the Harry Potter franchise’s Rupert Grint (lumbered with a dreadfully opaque Scouse accent) plays an RAF pilot who, along with a fellow cadet, is shot down over the Norwegian fjords. A similar fate also befalls a troika of Luftwaffe lieutenants (fronted by the actors Florian Lukas and David Kross). Happening upon a deserted cabin, the two groups are forced to take shelter from the harsh weather outside. 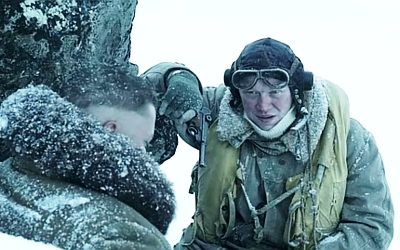 The German pilots initially take the unsuspecting Englishmen hostage in an unsteady implementation of power. However, as their fight for food and survival quickly becomes desperate, the heated relationships shared between the two groups – brought on by Lt. Schopis’ (Lukas) cagey dictatorship, begins to thaw, paving the way for friendships to emerge that are built on mutual understanding and a tenacious incentive to stay alive.

Cross of Honour dutifully attempts to capture the fraught nature of the two countries at war with one another through a diminutive tale, with Norway acting as the figurative middle man between the two opposing forces. Teasing out the delicate nature of friendship hidden amidst a time of unrest (something stressed to laughable effect in the film’s closing summation), the narrative intricacies of Næss’ film are firmly dislodged in favour of weak acting and a lowest common denominator screenplay that matches garish racial stereotypes with a hackneyed grasp of tone.

Exacerbated by an entirely indifferent score, not to mention an ill-fated use of the song Somewhere Over the Rainbow, Næss’ Cross of Honour plods from one sequence to the next, unable to escape an inherent feeling of transparency, of wearing its simple themes on its humdrum sleeve.