★★☆☆☆
A super stylised, visually evocative ode to good ol’ bricks and mortar from experimental Canadian filmmaker Guy Maddin, Keyhole (2011) is a difficult film to truly get a grasp of due to its myriad of textual influences. Part-Homer’s The Odyssey, part-Shock Corridor (1963), part-supernatural drama, Maddin’s monochrome mystery both confounded and astounded critics at Toronto and Berlin, but still arguably remains slightly less than the sum of its parts.

Thirties gangster and deadbeat father Ulysses Pick (Jason Patric) returns home after committing, alongside his posse, yet another heinous crime against society. With him are two bedraggled teenagers; a drowned girl, Denny (Brooke Palsson), who has mysteriously returned to life; and a bound-and-gagged hostage, who it transpires is Pick’s own son, Manners (David Wontner). Somewhat discombobulated, Ulysses is driven through his homestead on an indoor odyssey from the back door to his cancer-ridden wife Hyacinth (Isabella Rossellini) in an upstairs bedroom, meeting numerous shades and oddball characters along the way. 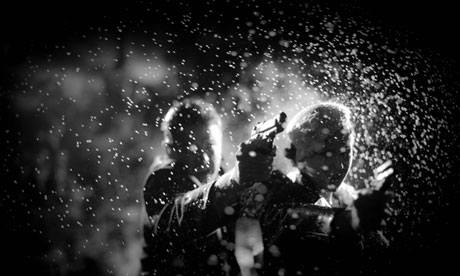 It could conceivably take two or even three viewings (as recommended by the director himself) to really appreciate all of Keyhole’s intricacies, but those anticipating a lucid homage to the gangster dramas of the 30s may well find themselves more than a little disappointed. Now onto his ninth full-length feature, the 56-year-old Maddin has never been one to hold his audience’s hand (perhaps the reason why wider distribution of his films has so often proved elusive), and his latest arthouse excursion is easily more challenging than it is enjoyable – especially on the inaugural watch.

Whilst leftfield European cinema regular Udo Kier makes a smile-raising (if slightly ludicrous) cameo as the stern Dr. Lemke, there is little within Keyhole that’s likely to draw much of an emotional response from the viewer, so detached are we from Maddin’s spectral world(s) of gangsters ‘n’ ghouls. With little distinction between the various dimensions, what’s left is a muddling – though technically-assured – voyage across the carpeted hallways of the Pick household, sailing far too close to the treacherous rocks of illogical, self-indulgent chaos to ever truly satisfy.

Maddin is undeniably a visual artist in the purest sense of the term, but so scattered are his visions that auteur status seems – at this point in time, at least – a near-unattainable goal (if a tangible target in the first place). Keyhole may well find cult status amongst a small select of the Canadian director’s most devoted (and patient) disciples, but for even the most hardened arthouse fan, this complex collage may prove too hard a nut to crack.