Alexei Balabanov’s latest film, Me Too (Ja Tozhe Khochu, 2012), begins almost like a gangster film. We watch on as the Bandit (Aleksander Mosin) sees off four adversaries in a back-alley shoot out, but the piece soon veers away at a 90 degree angle from genre filmmaking territory and goes to a place much stranger – and more intriguing. A Musician (Oleg Garkusha), tells his friend the Bandit of a special place – the Bell Tower of Happiness. According to rumour, something happened in the area (Chernobyl-esque). Shrouded in a perpetual nuclear-style winter, the mythical bell tower offers those enter transport to a place of happiness. 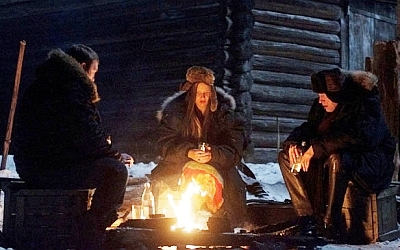 “I want to find happiness” says the Bandit. “Me too,” the Musician replies. Before setting off, the pair rescue their alcoholic friend, Matveyev (Juri Matveyev), who insists – once he’s stocked up with vodka – on collecting his father to take with them. They also pick up a prostitute (Alisa Shitikova) along the way. Balabanov is undoubtedly a talented and witty director. Me Too has a steadily ironic humour and the characters are all well-played and amusing, with Balabanov displaying a clear fascination with vibrant misfits – as well as a tendency to meander and procrastinate, rather than get on with the story.

Me Too’s story itself is a very obvious riffing on Andrey Tarkovsky’s Stalker (1979), with the land of permanent winter standing in for the Zone, and the Bell Tower of Happiness another version of the room. But unlike many Russian directors who at once are compelled to follow in Tarkovsky’s footsteps – yet at the same time intimidated by the weight of his influence – Balabanov is irreverent and informs the mysticism and philosophical yearning with a sardonic wit. The search for happiness is something that everyone wishes to engage in, but that only some will achieve.

Having gained success initially with crime movie Brother (1997), Balabanov went on to make himself a reputation as an exciting director of challenging and at times controversial, in the case of Cargo 200 (2007) films. Behind the occasional flippancy of the wit and the indulging in an easy pace, there is something serious at the heart of Me Too which elevates it and will perhaps see it gaining an international audience.