Arguably the most eagerly anticipated select of the 69th Venice Film Festival, Paul Thomas Anderson’s The Master (2012) tells the story of demobbed sailor Freddie Quell (Joaquin Phoenix), who following VJ day finds himself at a loose-end, drifting from job to job with a savage temper and an alcohol addiction. His inexorable slide toward skid row is interrupted when meets Lancaster Dodd (Philip Seymour Hoffman), self-proclaimed writer, philosopher, nuclear physicist and founder of new movement ‘The Cause’.

Dodd is drawn to Freddie and offers to ‘process’ him – a method of interrogation which is supposed to free him of traumas. Despite obvious connections to the founding of the Scientology faith by science fiction writer L. Ron Hubbard, The Master isn’t a downright denunciation of Dodd. In fact, his character is perhaps more similar to Jack Horner (Burt Reynolds) in Boogie Nights (1997), a fantasist surrounded by a protective family who find meaning and comfort in his eloquent and brilliantly delivered bullshit. 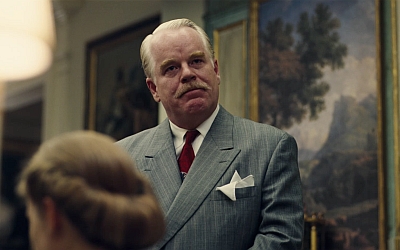 The performances are wonderful, with both central leads endlessly compelling. Phoenix will invite comparison with Daniel Day-Lewis in creating another full-on physical character, all stooped shoulders and constantly morphing sneer. Occasionally incoherent, often witty, he can be by turns unsympathetic and yet weirdly moving for all that. Especially standing next to the adherents of ‘The Cause’, Quell is an honest, direct and feral character, ready to let rip. As for Dodd, Hoffman basks in the opportunity to play someone who seems at heart a larger than life showman and huckster, a man of letters who enjoys having his public in thrall but occasionally – very occasionally – allows the mask to slip.

Anderson writes them some fantastic scenes where the two can go face-to-face and their relationship is the core of the movie, telling a Brief Encounter-style story of unrequited – or at least unfulfilled – romance. Freddie is a destructive influence who sporadically expresses a fierce sense of loyalty, but he is a man who cannot master himself, let alone accept anyone else as a master. And Dodd is drawn to a freedom that his success won’t allow him. With two dominant leads, it is admirable that Amy Adams as Lancaster’s wife and power behind the throne Mary Sue ruthlessly steals scenes at will and exudes a cool control, in one scene quite literally having Dodd in the palm of her hand.

Being Anderson, The Master obviously looks marvellous, using a wide variety of locations, and the period detail is well done. The music (again by Radiohead’s Jonny Greenwood) is in some ways more conventional as a score than past efforts, and perhaps less effective. Yet, the standard Anderson has set himself is so high that it seems unfair to mark his latest effort down simply because it’s not There Will Be Blood (2007). What The Master is, however, is the best piece of work screened at Venice so far this year, and perhaps even the zenith of 2012’s film releases thus far. And so, a masterpiece? We may have to wait and see, but this is an important, intelligent, epic and yet intimate piece of filmmaking from a master at the height of his powers.