★★★★☆
Having already picked up the Golden Bear prize at the Berlin Film Festival back in February and now Italy’s official selection for the Best Foreign Language Film Oscar at the 2013 Academy Awards, octogenarian brothers Paolo and Vittorio Taviani bring their divisive docudrama Caesar Must Die (Cesare deve morire, 2012) to the 56th London Film Festival. A pacey, 76-minute feature of significant narrative complexity, William Shakespeare’s monumental exploration of betrayal and duplicity seems to have found a perfect new home in the form of Roman maximum security prison Rebibbia, where real-life inmates regularly put on shows and recitals for the general public.

Each and every year, the inmates of Rebibbia, incarcerated mostly for Camorra-related crimes in the surrounding area, put on a stage production for paying punters. After hearing a glowing testimony from a friend who had witnessed such a spectacular, the award-winning Taviani brothers approached the prison’s stage director – their idea: to film both the rehearsals and a final live performance of Shakespeare’s Julius Caesar, a play where the conspiracies and plotting echo the past and present lives of these felons. After pouring their life and soul into their respective roles, the convicts return to their cells to ponder their crimes once more. 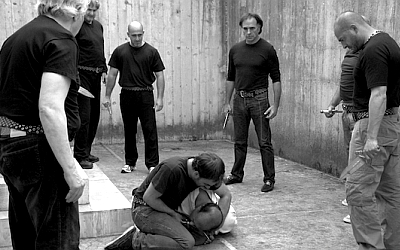 Towards the end of Caesar Must Die, following the inmates’ successful public performance, one prisoner-turned-player (who plays the part of Cassius) regales to the camera: “Since I discovered art, this cell has become a prison.” For him and his fellow cohorts, the play really is the thing, allowing them to paradoxically forget their present woes but also confront their past misdemeanours. Central among the men is the guilt-racked Brutus (Salvatore Striano), a real-life Mafioso unable to utter one particular line at a point in rehearsals due to past connotations with a violent incident her was party to.

The success of the Taviani’s latest endeavour hinges upon the exceptionally powerful turns of its non-professional cast, who only occasionally lift the veil behind which lie their actual personalities. So much of Caesar Must Die relies on the dichotomy between reality and fiction, with that infinitely telling line from Hamlet – “To hold, as ’twere, the mirror up to nature” – finding new relevance in the unlikely environs of Rebibbia’s concrete cell blocks and wire-surrounded yards, depicted in both full colour and monotone.

Stylish, engrossing and extremely well thought-out, Caesar Must Die stands as a hugely rewarding, award-winning comeback for Paolo and Vittorio following a five-year, self-imposed hiatus. Whilst other Italian directors, including fellow LFF entrant Matteo Garrone, have found inspiration in the realms of celebrity culture and reality television, the Taviani’s have won their country’s Oscar battle with a classical, yet still undeniably innovative fusion of contemporary prison life and good, old-fashioned smoke and mirrors.