The latest offering from veteran Algerian director Merzak Allouache, The Repentant (El Taaib, 2012) plays in the ‘Debate’ strand of this year’s London Film Festival – and it’s easy to see why. In 1999, after eight years of civil war and an estimated 200,000 lost lives, the Algerian government offered an amnesty to the jihadist rebels. They could lay down their weapons, return to civilised society, be dubbed ‘repentant’ and face no repercussions. When Allouache returned to Algeria in 1999, he found a country trying to forget the hatred and bloodshed and has very much looked to examine the situation and inspire discussion with this latest offering.

Following the tale of Rachid (Nabil Asli) from his long escape down the snowy mountains, the film delves into what a return to civilised society was like for such a man. Claiming to have no blood on his hands, he is shunned and threatened by the people of his home town who lost family members in terrorist attacks. Fleeing to the city, Rachid is helped out by a policeman who gets him a job in a café, in return for the promise of information. When Rachid recognises the local pharmacist, Lakhdar (Khaled Benaissa), secrets that should have been left up in the mountains also come flooding down. 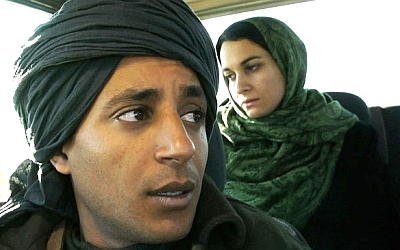 Attempting to explore what he deems to be something of a gag-order on the Algerian people, Allouache’s film looks to portray what it is like for a ‘repentant’ to try to function in normal Algerian society and how that society can function. The Repentant highlights how difficult it is for those on either side of the conflict – or caught in its crossfire – to just forgive and forget what has been done and in its climax, it serves as a reminder that violence is still present.

Trying to marry all of these different aspects into a satisfying whole is a difficult task and one at which the director makes a valiant attempt. The performances from the three leads, also including Lakhdar’s wife, Djamila (Adila Bendimerad) are fantastic and the slow drip feeding of plot creates a palpable tension. A stand-out scene being one in which we see a revelatory phone call only from the point of view of the one listening, Lakhdar, and must guess at its contents from his emotional reaction.

Where The Repentant does fall down is actually that it feels like it needs more time to breathe. Characters such as the café owner and especially the policeman, Redouane (Mohamed Takiret), end up feeling neglected and the audience is left wishing they’d been allowed a little more time to understand these characters’ compelling stories. One thing which is certain though, is that it can easily serve as the genesis of a great debate.