The Chernobyl nuclear disaster was the worst of its kind in history, with 300,000 people resettled due to an explosion in the fourth reactor. Thirty-one people died (that the Soviet authorities admitted to), and the fallout of radioactive contamination continues to have adverse effects on the health of the local people and surrounding environment, two decades on. So fair game, apparently, for some hackneyed horror movie schlock in the form of Chernobyl Diaries (2012). Regardless of whether you think it’s too soon to exploit the memory of a phenomenal human tragedy, director Bradley Parker distracts you from this ethical conundrum by making a below-average movie. 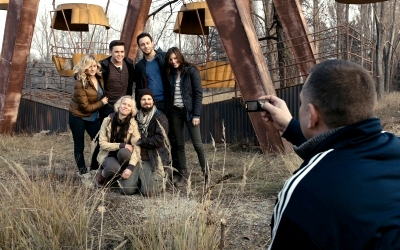 Chernobyl Diaries follows the lost-in-the-woods blueprint so obediently, so fervently, that you almost get the impression you’ve seen the film already. Four bright young things are backpacking around Europe, stopping off at the usual hotspots for foreign travellers: London, Rome, Paris and…Pripyat. While in Kiev, a massive Russian stereotype invites our hapless heroes on a tour of the Chernobyl exclusion zone, but things are not as they seem – the radioactive fallout has created zombie-like creatures who only come out at night, etc.

In reality, the greatest villain here is the shoddy, half-baked script. Our four leads are blander than rice crackers – but at least you’d care about rice crackers. Some laboured early exposition drums up minimal empathy. Then two new characters show up out of nowhere, halfway through, without explanation. Bull’s-eye targets might as well be tattooed to their foreheads. In fact, all of our luckless players are just cheap cannon fodder for the unseen monsters, and we merely place mental bets for who dies next.

This bumbling cheesiness has its own stupid unintentional charm, and in horror terms, at least, it’s adequately directed. The middle third creates a decent sense of dread: abandoned towns are creepy, and my yellow-bellied viewing companion did spend much of the film cowering under a blanket. But Parker has a weak handle on summoning unpredictable suspense, and builds to a miserably unsatisfying payoff. An alternate ending on the DVD does nothing to save Chernobyl Diaries from itself – avoid like a nuclear winter.