Maverick Japanese film director Gakuryu Ishii returns after a ten-year hiatus with the unsettling farce Isn’t Anyone Alive? (2011), which receives a UK DVD release this week. Ishii remains somewhat of a revered filmmaker in Japan, responsible for a series of genre defining youth dramas in the late seventies and early eighties, his innovative visual style was matched by his biting social commentary of the disenfranchised Japanese youth culture. Isn’t Anyone Alive? comes with a certain degree of anticipation – therefore, it comes as somewhat of a disappointment that he has so little of a subversive nature to actually say.

The premise of Isn’t Anyone Alive? is promising and suitably incongruous. On a University campus a group of self-centred and belligerent students are ambivalently going about their lives, until one by one they are struck down dead by a deadly virus. This is the beginning of the end, not just for the social sphere and hierarchies of this particular teenage community, but for the entire population of the world. However, the films only interest, mirroring that of the teenage protagonists, is in subjective experience, of pop music, clothes and physical appearance. 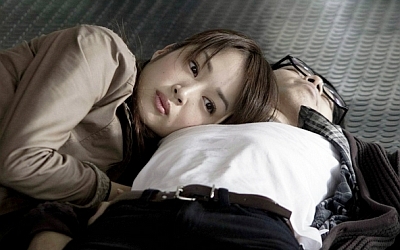 Ishii presents us with a group of vain and unpleasant characters, whose attempts at philosophical ruminations on mortality extend only as far as the inane and banal trivia of their own lives. This is played for laughs, or rather a gallows humour of acknowledging the superficiality of youth culture. But there is nothing fresh or inventive in this – it often feels heavy handed and clumsy in Ishii’s execution. Characters act like self-referential caricatures, flimsy and two dimensional, painfully aware of their superficiality and expendability.

Isn’t Anyone Alive? is all about the setup, albeit a frequently adopted convention of impending Armageddon, a concept which allows for the exploration of humanity in the face of the breakdown of social structures (Lars von Trier’s 2011 film Melancholia being a good example). There are a number of wonderful moments, the absurdity of the situation matched with some deliciously absurd dialogue – from a vain and egotistical pop star, to a mismatched couple simultaneously seeking solitude and companionship.

Ultimately, Ishii’s Isn’t Anyone Alive? is sadly lacking in humanity, there is no counter point to the relentless series of unpleasant characters who serve as symbols, or rather symptoms, of the materialistic and consumer driven youth culture of Japan. Subsequently the film comes across as cold and as calculated as the teenagers it seeks to ridicule. Whilst at times amusing, it’s not big and it’s not clever.