Maïwenn writes, stars and directs Polisse (2011), a provocative drama centred upon a Parisian Child Protection Unit, exploring the team members’ various lives and relationships inside and outside of work. Having spent time observing real CPU officers, Maïwenn’s script is reputedly based on genuine conversations and cases, and herself adopts a similar position in this film as a photographer assigned to capture the task-force at work. Yet her role as naive newcomer Melissa is relatively small, with the love story between her character and hardened professional Fred (rap star Didier Morville, aka Joeystarr) does, at times, feel almost wholly irrelevant.

Morville’s part is far more meatier, and he handles it with great confidence. The same can also be said for the rest of the cast members in the CPU, who clearly got behind Polisse and threw themselves into it, resulting in a highly energised ensemble performance. However, despite (or perhaps due to) such enthusiasm, the performances often border on the melodramatic, their explosive reactions all too over-the-top a lot of the time. The characters are as stressed as they are passionate and it’s understandable that their emotions run high, but arguments escalate far too quickly and are often directed at witnesses or suspects. 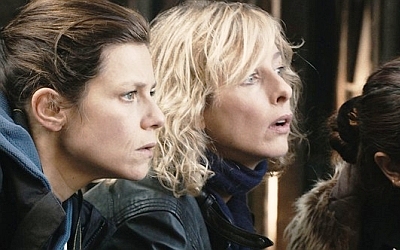 This isn’t the only example of inappropriateness – a lot of the conversations in which paedophilia is discussed are almost comedic, creating a jarring viewing experience. One example is a mother’s casual confession to two police officers that she sexually abuses her young son to help send him off to sleep, delivered in such a way that you’re unsure if you should laugh at her naivety or be shocked by her behaviour. Another scene depicts a surly teenage girl explaining that she gave a man oral sex to get her phone back, with CPU members giggling as they ask her what she’d do for a MacBook.

Maïwenn’s latest is undeniably messy and chaotic, with over two hours of running time that could have benefited from a tighter edit. It’s never boring however, and the ‘good guys’ in this movie are not straightforwardly so, all disturbed by their jobs and what the types of people they encounter. Polisse succeeds in inspiring respect for those who expose themselves to unpleasant truths in lines of work such as this, until it is abruptly ruined by the ridiculous ending inserted for pure shock value.

Polisse’s script is truly strange and is likely to be found offensive, but credit to Maïwenn and co-writer/co-star Emmanuelle Bercot for creating something daring and raw to expose the shocking truths about the vulnerability of children, a topic that we often shy away from. This has already proved itself as an audience-divider and definitely not for everyone, but is undoubtedly bold, challenging viewing.