Next Monday (10 March) sees the release of Destin Daniel Cretton’s directorial debut Short Term 12 (2013) on DVD and Blu-ray, courtesy of Verve Pictures. Once an outside bet for a late Academy Awards run, the film unfortunately missed out on an Oscar nomination, particularly for its outstanding star performer, Brie Larson. Perhaps best known to UK audiences for her supporting roles in comedies Scott Pilgrim vs. The World and 21 Jump Street, Larson superbly illustrates her serious drama credentials in Cretton’s Sundance hit, which follows workers at a at a foster-care facility for at-risk teenagers. CineVue’s Adam Lowes recently caught up with Larson to discuss the award-winning film and her extremely varied career to date.

Adam Lowes: You’ve previously been known for your work in comedy. Were you consciously looking for a new challenge when Short Term 12 came your way?

Brie Larson: I guess how I gravitate towards the work happens inconsequentially, but I can’t imagine doing comedy over and over again. I like to try and do different movies otherwise I feel everything I do will muddle into one character. A variation in material uses different muscles in my brain and it constantly gets me out of my comfort zone, which I think makes for the best work. That fear and burning sensation that you’re going to actually fall on your face is what keeps you alert and makes a great piece of art, in my opinion. 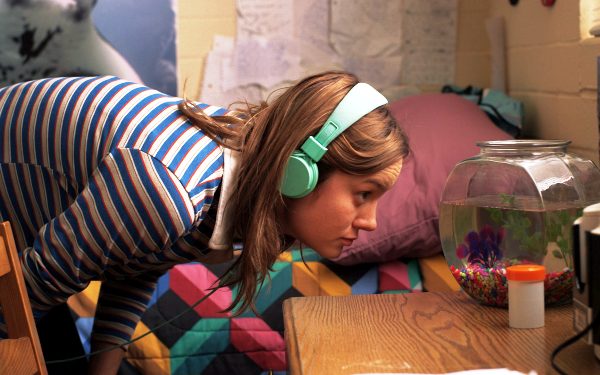 AL: The shooting style in Short Term 12 is very intimate. Did it take time for you to get used to?

BL: I love independent film. The best way to describe the difference between that environment and a studio film is like camping on the beach or staying at a 4-star hotel. I think both are wonderful and charming, but it depends on what you’re in the mood for. The director Destin [Daniel Cretton] and DoP Brett [Pawlak] really created an environment that reflected whatever we were shooting. The group therapy scenes felt comfortable for everyone of the twenty-plus crew because they were able to fill the space in the room we shot those scenes in. The kids also felt more comfortable there, and it was a reflection of what we were doing. Then we’d do a scene where it was just me and John Gallagher [he plays her co-worker and lover, Mason] one-on-one, and it was better if there was almost nobody in the room. Even keeping the camera outside the room and shooting in towards us gave the intimacy you’re talking about.

AL: Which world do you find it easiest to work within? Are you more attuned to comedy than drama?

BL: It doesn’t matter for me. Even with drama, I feel like it has to have comedy in it. It’s one of the important elements to life. I don’t think a movie like Short Term 12 dealing with the subject matter that it does, would work without moments of lightness and humour. I don’t have a preference. I think comedy is wonderful in the way it works in the “spoonful of sugar makes the medicine go down” sense.

AL: Was there an idea that something special was coming together as you were filming?

BL: No, there was zero time to think about any of that. We were trying to do a really ambitious movie in twenty days. I barely had time to think about in the next scene, let alone if it was even good, but I think that’s the way I want to continue to work. Keeping my head down and staying focused. I’ve never experience the sort of exposure that’s happened [to me] in the last year. It’s a very new experience and mentally I’m going, “what the hell is happening” but it’s not worth paying attention to the ups and downs.

AL: You say it was a quick shooting schedule. Was there any time for rehearsals or were you having to find everything on the day?

BL: We had one day where all the kids and the staff playing the support workers had lunch. It was a kind of get-to-know-you meeting and we played some games to build a relationship. I guess I did what you could call really short improvs that weren’t based on the script with each one of the kids and it was just a chance to figure them out.

Win a copy of Destin Daniel Cretton’s Short Term 12 with our latest competition. Simply follow this link to enter.