American indie director Lynn Shelton’s long-awaited follow-up to the excellent Humpday (2009) sees her once again calling upon the improvisational acting style of mumblecore veteran Mark Duplass in one of the lead roles. Although Your Sister’s Sister (2011) is slightly more generic than the director’s previous output, the parade of incredibly likeable characters and the gentle and awkward humour of their varying situations is enough to make the film one of the best romantic comedies of the year. It’s been a bad year for protagonist Jack (Duplass); he has lost his brother and is lacking focus and direction in his life.

His best friend, Iris (Emily Blunt), suggests he abscond to her father’s secluded house for some reflection-filled alone time but the very thought of this prompts him to threaten gauging his own eyes out with a fork. Things at the house aren’t as dour as he expected, however, when he pulls up to find Iris’ sister Hannah (Rosemarie DeWitt). She is similarly taking refuge – after breaking up with her girlfriend – and they attempt to find solace in one another’s drunken arms which naturally prompts awkwardness and recriminations when Iris arrives the following day. 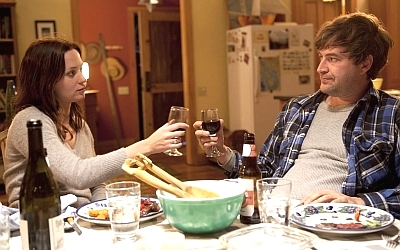 As with Humpday, there was clearly a lot of scope in the film for the actors to improvise within scenes and this creates wonderfully naturalistic moments throughout. The three leads are fantastic in all they do with their chemistry utterly believable and DeWitt stealing the show somewhat. The opening encounter between Hannah and Jack is perfectly judged, as is both of their reactions to the sudden and unexpected appearance of Iris.

The realism of the performances is reflected in the the film’s storyline which sees the inebriated tryst create a series of different, and mature, questions that the trio need to navigate. Your Sister’s Sister is imbued with a sincerity that inspires great empathy within the audience keeping you totally engaged in the action and naturally keen that the characters are able to solve their troubles. This is all augmented by the fact that the characters and scenes remain funny and charming from first minute to last.

Your Sister’s Sister’s unpolished naturalism does, unfortunately, fall down a little in the plot’s resolution which seems to all come about a little too easily, standing out as less authentic than the preceding hour in the characters’ final, easily-made decisions. This does not, however, undo what has come before and can easily be forgiven while the final shot restores the deftness of touch that has been evident throughout.