Whilst the fruits of last year’s Arab Spring are currently being sampled in a number of Middle Eastern former-dictatorships, Israel and Palestine remain locked in an unedifying stand-off over ownership of the contentious Gaza Strip. Self-proclaimed Palestinian ‘peasant’ – and now filmmaker – Emad Burnat wades lens first into this ugly conflict with 5 Broken Cameras (2012), a stripped-down, thoughtful portrayal of life on Gaza’s rolling hills. Burnat tirelessly documents the Israeli settlements that slowly begin to encroach upon his own long-standing village of Bi’lin, highlighting the non-violent protests and rallies organised by his family members, friends and neighbours. 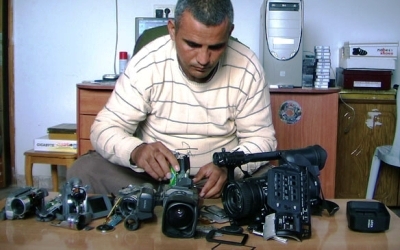 As its perfectly apt title would suggest, 5 Broken Cameras sees Burnat utilise several different recording devices over the course of the film, as one by one they succumb to Israeli bullets, gas grenades, traumas and other inevitable conflict-related fates. Thankfully, what Burnat has managed to capture with each device is as frank and honest an account of life on the Strip that one could ever expect from one of the involved parties. Accusations of bias and manipulation have already risen against the film (for obvious reasons), yet this still doesn’t feel like the international rallying call that some may have expected.

Shot during the course of five years, over which time we see Burnat’s four sons shaped by the conflict around them (at one point his youngest, Gibreel, states that he would be prepared to kill an Israeli soldier), 5 Broken Cameras shies away from making bold, sweeping political statements; he is no politician – simply a father fighting so his sons may enjoy the same freedom as the family’s coop-less chickens. Just as each of his children holds a special place in his heart, each individual camera is similarly symbolic of a specific stage of the protests, a collection of now-precious artefacts that our narrator proudly displays in the film’s opening scenes.

Already an award-winner on the festival circuit, 5 Broken Cameras should find its audience in the politically engaged and politically aware. For those less inclined, however, its perhaps more of a tough sell. Much like Iranian filmmaker Jafar Panahi in 2011’s This is Not a Film, Burnat presents an extremely personal insight into an incredibly complex situation that’s almost impossible to wholly grasp – and as such, may well inevitably leave some cinemagoers a little cold.