★★★★★
A runaway hit on the 2012 festival circuit (with acclaim coming at both Sundance and Cannes), Benh Zeitlin’s vibrant and imaginative eco-fantasy Beasts of the Southern Wild (2012) is not only one of the most impressive directorial debuts seen in the last 12 months, but also a strong contender for film of the year. Galvanised by some arresting cinematography and a commanding central performance from early Best Actress Oscar frontrunner Quvenzhané Wallis (aged just six at the time of shooting), this is an exemplary example of bold, uncompromising American independent filmmaking.

Wallis plays the small but defiant Hushpuppy, who we’re told “lives with her daddy in the Bathtub”. The ‘Bathtub’ in question is a ramshackle bayou tin town, isolated from the world of big business and industry by an enormous, overbearing levee. With her mother inexplicably absent and her semi-alcoholic father Wink (a live-wire Dwight Henry) prone to bouts of aggressive self-expression, Hushpuppy spends her days traipsing through the surrounding woods, every now and then delicately listening to the respective heartbeats of its animal inhabitants. 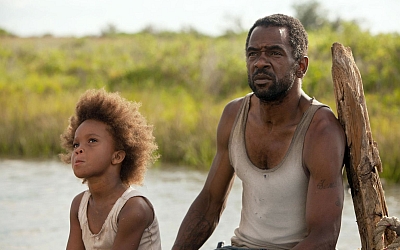 However, Hushpuppy and Wink’s hand-in-mouth existence is soon threatened by a cataclysmic storm, which has the dual effect of both completely submerging Bathtub and the surrounding environ and also reanimating a herd of ginormous, previously frozen prehistoric aurochs (large, pig-like creatures), who begin their relentless charge towards what remains of the decimated town. Desperate to restore order to the world she can see falling around her, Hushpuppy takes it upon herself to watch over both the townsfolk-come-refugees and her fast-fading father.

Though Wallis’ Oscar campaign may be in danger of running out of steam a little early (thanks to some Oprah-related overexposure), the sheer presence and energy this newcomer exerts as plucky protagonist Hushpuppy shouldn’t be taken lightly. It’s hard to remember a more impactful debut performance from an actor of such a tender age, and most importantly Wallis’ star turn never feels contrived, forced or – worst of all – actorly. In support, Henry is almost equally magnetic as the wayward Wink, a lost soul who mourns the loss of his greatest love, whilst striving to protect the one person who reminds him (for better or for worst) of her most.

Like some wonderful kind of live-action Studio Ghibli effort that has somehow found its way across the Pacific and onto America’s ravaged, weather-beaten doorstep, Beasts of the Southern Wild has all the elements necessary to make the crossover from festival favourite to topical, word-of-mouth success. Whilst further examples may be few and far between (Andrew Dominik’s Killing Them Softly and Sean Durkin’s Martha Marcy May Marlene being two recent exceptions to this rule), it’s comforting to see that American cinema is still capable of making intelligent, narrative-driven cinema, capable of confronting contemporary issues. Thankfully, Zeitlin’s ecologically-attuned debut looks set to capture both hearts and minds.