One of two relatively high profile, Irish-produced features to screen at this year’s Film4 FrightFest (the other being Jon Wright’s hugely enjoyable alien creature-feature Grabbers), Conor McMahon’s third film, horror-comedy Stitches (2012), suffers far more than the latter in terms of being caught between two distinct genres. Neither particularly humorous nor frightening, McMahon’s killer clown B-movie comes across as a particularly damp squib, failing to ever truly catch alight despite the involvement of well-regarded British comedian Ross Noble and some fairly inventive (and over-the-top) teen offings.

After an unfortunate incident involving a razor-sharp kitchen knife whilst entertaining 10-year-old birthday boy Tommy (Tommy Knight) and his malevolent young friends, children’s entertainer Richard ‘Stitches’ Grindle bides his time in the town’s ghoulish cemetery before being inexplicably brought back to life six years later. Hungry for revenge on the now 16-year-old Tommy – on the night of yet another birthday extravaganza – Stitches infiltrates the boozy teen party before unleashing an unholy torrent of bloody retribution on those whom he deems responsible for his untimely demise. 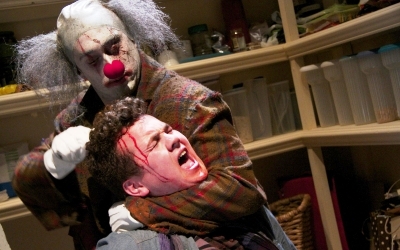 With only one discernible star name on its roster (in the obvious form of Noble), Stitches feels far more like a BBC Three one-off commission than a bona fide theatrical release. Production values are understandably low, but unfortunately the myriad of teen performances just aren’t strong enough to pull the film through. Referencing a multitude of classic horror movie and tropes – from Stephen King’s IT to Wes Craven’s self-referential Scream slasher saga – Stitches also fails to create an identity of its own, relegated to the role of pastiche rather than homage, despite an interesting central conceit.

Noble is decent, yet largely unremarkable as Stitches, a potentially rich antagonist dampened by the script’s reliance on intentionally boorish puns and one-liners. The former children’s entertainer’s predatory, near-paedophilic gait and demeanour is an intriguing slant on the killer clown template, but – given recent topical events – was perhaps an angle best left unexplored. Elsewhere, the teen cast adequately fulfil their stereotypes (the narcissist, the whore, the sloth) but little more, giving us little cause to root for their survival and every reason to savour their gruesome evisceration – presumably the whole point.

Certainly one for the home entertainment market, McMahon’s Stitches doesn’t quite seem certain as to what it wants to be, yet may nevertheless appeal to die-hard fans of Noble’s dead-pan shtick. Just don’t expect this to kick-start your Halloween film festivities.