DVD Review: ‘In Your Hands’

Over the past decade or so, multilingual stage and screen star Kristin Scott Thomas has carved a palatable little niche for herself; appearing in intense French dramas such as 2008’s I’ve Loved You So Long. This has seen the actress, who has been a resident in Paris since her teens, acquiring the kind of interesting parts that she has perhaps not been offered so much in the UK. Her most recent starring role is in the second feature from director Lola Doillon, In Your Hands (Contre Toi, 2010), which sets out to look at the strange world of Stockholm Syndrome with its star hostage to Pio Marmaï’s vengeful kidnapper.

Anna Cooper (Scott Thomas) is a lonely and childless obstetrician living and working in Paris. After running desperately down a road in an over-large t-shirt and listening to several days worth of answer phone messages, she heads to a police station. Here she recounts her kidnapping by an unknown assailant who proceeded to confine her to a dank room in an unknown location. The man is soon identified – in the flashback, but not to the interviewing officer – to be Yann (Marmaï). A grieving widower who, it is revealed, lost his wife during complications in childbirth for which Anna was the surgeon. 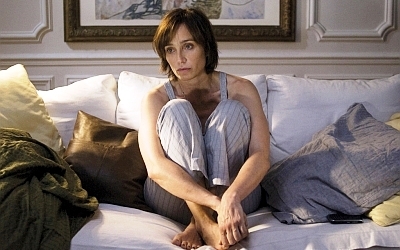 Needless to say, in a mixed gender two-hander of this sort, initial contempt on either side soon begins to give way to more primal urges, at least on the side of Yann. Scott Thomas is fantastic in the lead role; giving Anna a prickly nature that is not easily cowed by the aggressive captor, but that also slowly becomes obsessed with him. She even attempts to track him down after her escape and not, it seems, for retribution.

Aside from that performance, though, there is not an awful lot to write home about with In Your Hands. The scenes between the two seem to bristle due to Scott Thomas and there is never enough of a real sense of danger to make the drama compelling enough. Once Anna is free to do as she pleases, he choices are definitely interesting ones but the film doesn’t delve deep enough into the idea of Stockholm Syndrome or its affects to really grip.

Still, if you like the inner torment of Scott Thomas’ French performances or intriguing hostage dramas, then there’s enough to keep you entertained. In Your Hands just didn’t feel like it had afforded enough time or consideration to the period in which she was actually in his hands, and as such it all felt a little bland.

Win a copy of Lola Doillon’s In Your Hands on Blu-ray with our brand new competition. Follow this link to enter.