The over-arching ‘narrative’ of Santa Sangre – if it can even be called such a thing – follows circus urchin Fenix (played by Jodorowsky’s sons Adan and Axel in his younger/older years respectively), a budding performer torn between his bloated, adulterous father and devoutly religious mother. After witnessing a bloody battle between the two as an adolescent boy, Fenix is committed to a mental asylum, living out said traumatic ordeal over and over again. Eventually released into the care of his highly unstable, now armless (!?) mother, Fenix is once again cast into a nightmare existence of crazed maternal oppression and unspeakable desires. 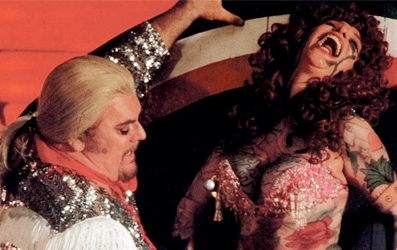 Whilst Jodorowsky’s evocative tale of phantom limbs and black magic may not quite be as out-on-its-own as it initially seems – motherly possession had, after all, been a staple of horror cinema for decades prior: see Psycho (1960) and/or Carrie (1976) – there’s still something vibrantly unique about this particular Mexican fantasy. From dying elephants to contortionist sex sirens (take note Monsieur Carax), Jodorowsky revels in the bizarre and the utterly bonkers, throwing vast, often conflicting ideas onto the screen as if his film were a Jackson Pollock piece – yet at the same time grounding it in the intense, telepathic relationship between mother and son. Like a knife-throwing Norman Bates, the re-risen Fenix finds himself caught completely under the spell of his maniacal mater.

Jodorowsky, already known by many as the man behind the 1970 experimental western El Topo, found wide-spread international recognition thanks to Santa Sangre, a film now commonly regarded as his magnum opus. With new feature La Danza de la Realidad reputedly on its way in 2013 (his first outing in 23 years), hopes will be high that the veteran auteur can repeat his past glories – yet even if this isn’t quite the case, his 1989 hybrid horror looks to have finally found its rightful place in off-the-wall arthouse cinema history.

Win a copy of Alejandro Jodorowsky’s Santa Sangre on Blu-ray with our brand new competition. Follow this link to enter.