Considering its success upon its theatrical release earlier this year, it’s perhaps risky to say that The Amazing Spider-Man (2012), directed by Marc Webb and starring Andrew Garfield and Emma Stone, is in-fact a bit limp. After his parent’s death in a plane crash, Peter Parker (Garfield) goes to live with his Uncle Ben (Martin Sheen) and Aunt May (Sally Field). During a visit to a high-tech laboratory run by his father’s old colleague Dr. Curtis Connors (Rhys Ifans), Peter is accidentally bitten by a radioactive spider, the result of which has an alarming effect on his physical make-up placing his life, and that of everyone he loves including his new girlfriend Gwen (Stone), in danger.

It seems the future for superhero movies is to take them back to the beginning. If the franchises popularity seems on the wane the big studios, rather than letting the characters take dignified retirement, are increasingly starting over again. Christopher Nolan did it successfully with Batman Begins (2005), and now the appropriately named Webb has done the same for Spider-Man. 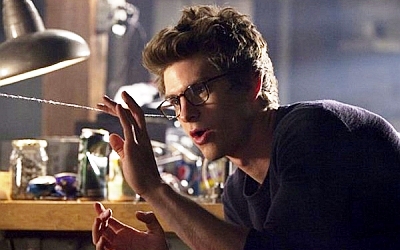 Films such as The Amazing Spider-Man are hard to critique seriously because they are, quite simply, not serious. That’s not detracting from the fact that technically they’re marvellously inventive pieces of filmmaking. Effects are, as everyone knows, so advanced that you really do believe a man can jump the height of a house or spin synthetic webs at the flick of his wrist. The look of these films is also undeniably sumptuous, as it should be considering the millions of dollars spent on their production. However, these qualities are really the only things which films like this can, or should be, judged upon.

To wax philosophical about the inner meanings of films which are essentially celluloid popcorn, gives them too much credit whilst doing more serious cinema an injustice. With this in mind, The Amazing Spider-Man is great fun. The set pieces, particularly the finale between Spidey and Dr. Connors’ Lizard incarnation atop a Manhattan skyscraper, are impressively staged, whilst the film is generally, as previously said, beautiful to look at in a high-tech, glossy way.

The characters as well – from Garfield and Stone’s achingly hip American high school kids, to Sheen and Field as Peter’s uncle and aunt, and Ifans’ moody science boff – make the film flow with their consummate portrayals of the central characters. And that, ultimately, is where you should stop. If you take The Amazing Spider-Man at face value, it’s great fun. Try to look any deeper, however, and you’ll most likely be disappointed.