Widely considered as one of the most sophisticated comedies ever produced, Trouble in Paradise (1932) fizzes like a glass of vintage champagne – frothy and light, yet with a tangy aftertaste which lingers long after the last drop is finished. Featuring Miriam Hopkins and Kay Francis, two incomparable stars from the Golden Age of Hollywood, along with the debonair Herbert Marshall, and the comic genius that was Edward Everett Horton, director Ernst Lubitsch’s influential masterpiece of witty put-downs and double meanings is as fresh and sharp today as it was when first released 80 years ago. 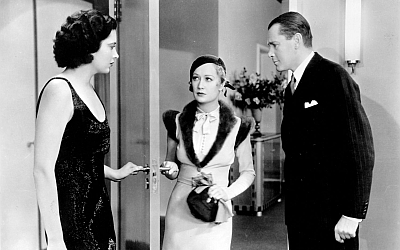 Gentleman thief Gaston Monescu (Marshall) meets his match in Lily (Hopkins), a beautiful pickpocket whose slight of hand is matched only by her equally fast tongue. Joining forces they plan to double-cross Madame Mariette Colet (Francis), a wealthy business woman who has inherited her late husband’s perfume empire. However, Monescu didn’t count on falling in love – with both women – a comic situation which can only lead to trouble for all. There is nothing irrelevant in this witty comedy of errors. Where many so-called humorous films (particularly those produced today) fall flat by trying too hard to make its audience roll around in the aisles, Trouble in Paradise works by doing just the opposite – by almost playing it straight.

No part of the pin-sharp dialogue by Samson Raphaelson, who was responsible for putting the words into the mouths of Cary Grant and Joan Fontaine in Alfred Hitchcock’s Suspicion (1941), is superfluous, taking it as near to the edge of sexual acceptability as he could without falling foul of the censors and the infamous Hays Code, introduced in 1930 for the moral safety of the filmgoing public. Lubitsch was also adept at creating impact through minimalism. His style, known as the ‘Lubitsch touch’, said more through what wasn’t shown than what was, and is used to striking effect here as the three main characters of Lily, Monescu and Madame Colet, play the others off against each-other in a game of sexual cat and mouse.

This feeling of being pared to the bone carries through to Madame Colet’s stylishly stark art deco apartment in which much of the action unfolds, whilst Travis Banton’s sleek fur trimmed wardrobes, that the two female protagonists find themselves kitted out in for their ensuing battle of wits, appear even more decadent due to his minimalist touch. Watching Lubitsch’s Trouble in Paradise – released for the first time on digitally restored DVD as part of Eureka’s Masters of Cinema series – reminds you how much fun film used to be. Regrettably, it also leaves you lamenting over the fact that it seldom appears quite so effortlessly sublime now.