Winner of the Queer Palm at this year’s Cannes and Best Canadian Feature at Toronto, 23-year auteur in the making Xavier Dolan offers us an unconventional love story in Laurence Anyways (2012), demonstrating the pitfalls of his unrestrained approach to filmmaking. The opening shot shows the staunch strut of a woman walking down the streets of Montreal, stared at in a series of reaction shots from perplexed onlookers. Cutting back 10 years to the early 1990s we meet Laurence (Melvil Poupaud), a successful academic who brims with masculinity, and his alternative girlfriend Fred (Suzanne Clément), a free-spoken film director.

Life, it appears, could not be better, that is until Laurence confesses that he feels like a woman trapped in a man’s body. After the initial turmoil brought on by this revelation, the couple agree to face this challenge together. With friends and family varying in their level of acceptance, Laurence’s new lifestyle tests the boundaries of the couple’s love over a decade, in this alternative tale of love in the margins. The host of expertly framed, visually stunning shots from cinematographer Yves Bélanger, capture everything from radiating beams of neon strobe lights in sweaty nightclubs to the scenic, snow tipped shores of Black Island on Lake Winnipeg. Dolan accompanies this with a diverse score that juxtaposes the likes of Brahms’ Symphony No. 4 with retro tunes of the 1980s and 90s, breathing fresh life into Visage’s Fade To Grey. 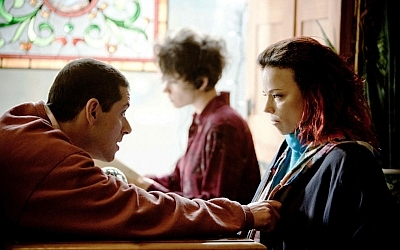 As well-crafted as these moments are, they’re sadly symptomatic of the ultimate downfall of both Dolan as a filmmaker and Laurence Anyways. Often, Dolan all too happily over indulges in his youthful skills. There is the repetitive use of slow motion, in which a character looks over their shoulder for a poignant reaction shot in every other scene. There are mountains of superfluous moments which, under a more stringent eye, would have not made it through the edit. This builds to a tremendously self-indulgent, 168-minute runtime, removing the impact of the repeated camera trickery that Dolan is so desperate to impress us with, like a needy child and its latest crayon drawing.

Equally, the surface level treatment of the issues contained in the love story fail as a support structure able to hold such a lengthy runtime. Dolan never truly grapples with the issues of transvestism with any real emotional weight. This is further hindered by Poupaud, who fails to truly convince us of the suffering the character faces in his rebirth, providing over acted gestures to portray his femininity. Whilst Poupaud remains very much a caterpillar throughout, Clément’s performance as the emotionally drained firecracker is a whole different story. Through her impacting portrayal we discover a woman who faces the question of whether she can still love a man she no longer recognises, demonstrated with heartbreaking pathos.

Dolan shows so many promising signs throughout, but will not bend to the authority of a good editor, who could have sculpted Laurence Anyways into a finer exploration of gender. Instead we have a beautiful gateau of a film that collapses under its own, gloriously opulent weight.