Already in line for an English language remake, with Hollywood go-to ‘goofball’ Vince Vaughn reputedly attached to star, Québécois comedy Starbuck (2011) receives a limited UK release this week off the back of some positive overseas press and a relatively satisfying US box office haul. Joining the pantheons of the ‘sperm canon’, Ken Scott’s French language virility tale stars Gérard Depardieu-lookalike Patrick Huard as the titular ‘Starbuck’ (his chosen alias, real name David Wozniak), a down-and-out local butcher who made a great deal of money as a young man donating his remarkable “high quality” gametes to an overly generous sperm donor clinic.

Rudely shaken out of apathy by an existential mid-life crisis – and also the acute need to raise $80,000 to pay off a pair of disgruntled drug dealers – things get even worse for Wozniak when he discovers that a group of around 500 of his legitimate offspring have banded together in order to claim their dues from their biological father, a shadowy figure known only as Starbuck. Compelled to make amends for his enforced paternal absence – and against the best advice of his portly lawyer friend – Wozniak begins to serve his children as a type of guardian angel, drifting into their respective lives in order to make things better. However, when his on-off girlfriend reveals that she too is with child, our productive protagonist must decide upon which family to put first. 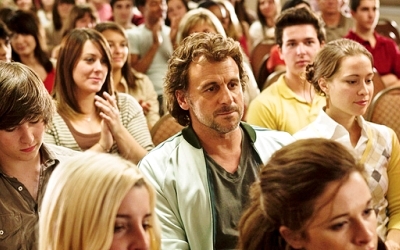 There are certainly a number of commendable strings to Starbuck’s bow, from its gloriously ludicrous initial premise through to the likeable performance of Huard as Wozniak, a well-meaning everyman who can’t help but screw things up despite the very best of intentions. Unfortunately, somewhere towards the middle of the film, Scott seems to doubt his own concept, devolving his piece into a much more straightforward plod towards inevitable redemption. What begins as a promising, post-Broken Flowers (2005) revaluation of contemporary relationship dynamics and familial entitlement drops away into the land of the sentimental and saccharine – the Hollywood ending already set in place.

Laughs, whilst there, do also become progressively hard to come by as Starbuck labours towards its didactic conclusion. The best moments of humour are often found in Wozniak’s shady (yet again, good-spirited) acts of voyeurism upon his army of estranged children, raising a non-condemning eye at a young man who moves through a series of romantic encounters with the same sex. Sadly, for every plus there is an almost immediate minus. His intervention into the destructive routine of an adolescent heroin addict feels incredibly out of place, with the habit miraculously kicked a whole ten minutes later. Apparently, it’s not just Wozniak’s seed that has a touch of the miraculous.

Starbuck fails valiantly to live up to the quality of its opening half hour, folding in on itself far too quickly to administer much satisfaction. Whether or not the upcoming Hollywood remake will remedy the film’s floors – or, more likely than not, further compound them – remains to be seen. For Scott’s original however, much like Wozniak’s past onanistic odyssey, the build-up is pleasant but the pay-off faintly disappointing.