Originally written in the late 1990s, Dennis Gansel’s vampire film We Are the Night (2010) – starring German arthouse star Nina Hoss – spent almost a decade in development hell before the success of the Twilight franchise reopened the doors for it. With bloodsucking very much back in vogue, especially at this time of year, Gansel revisited his script (which previously ran along the lines of the now passée human/vampire love story) and gave the storyline a new twist. This revamped rendition can now be sampled as the film arrives in UK cinemas this week for a one-off Halloween run.

Lena (Karoline Herfurth) is a Lisbeth Salander-inspired Goth petty criminal who ends up in a highly suspect nightclub in Berlin one evening. There she is spotted by the head of a vampire trio, Louise (Nina Hoss). Clearly attracted to Lena, Louise changes Lena – shedding her of her Goth look in the process – whilst introducing her to Charlotte (Jennifer Ulrich), Nora (Anna Fischer) and their hedonistic lifestyle. Little does anyone suspect though, Lena has an admirer in the Berlin police department, Tom (Max Reimelt), and he is soon on the trail via the blood-drained corpses they leave in their wake. 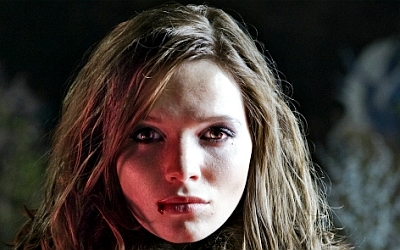 Through each of the three vampires that Lena comes into contact with, Gansel attempts to cover all of the possible bases. Louise is centuries old and desperate to replace her true love – the vampire who created her; Charlotte is a silent movie star who is now bored of the vampire lifestyle and has a serious death wish; Nora the young party girl who is realising that she’ll never love and be loved again.

Sadly, all of this is only ever really scratched at and the integral sapphic desires of Louise, which has led to everything else, is only really touched upon briefly in a bitter remark from Charlotte. There are interesting ideas posited, and nice touches throughout (such as a ritual of watching the sun rise just as long as is bearable) but We Are the Night ultimately feels like just that and not much else. The thriller elements are undercooked and to say that Lena and Tom’s is a love story would be overstating their relationship enormously – which is precisely what the film proceeds to do.

There are a couple of nice kills – a neck being snapped in the opening scene is quite well done – and a few moments that fans of vampire films are bound to enjoy. Yet sadly, despite taking a long time to arrive, Gansel’s We Are the Night never quite hits the right spot. It has plenty of clever moments but it neither provides the requisite entertainment or emotional heft.