Rita’s Last Fairy Tale (Poslednyaya Skazka Rity, 2011) is a playful Russian fantasy which imbues its harrowing tale of life and death with an enchanting collage of imagery. A surreal and at times beguiling journey, Renata Litvinova’s disjointed and far-fetched magical adventure also demands both an open mind and significant patience. The film opens with an elegant lady being driven to an undisclosed location. Her attire is fitting of a pantomime princess, draped in a graceful frock accompanied by an eccentric headdress. We soon discover that this mysterious woman is Tanya (Litvinova herself), a beautiful incarnation of the Grim Reaper.

This representation of death in a petticoat is returning to file a report on Rita (Olga Kuzina), a young doctor whom she recently helped guide into the afterlife. Told through a chronological collection of flashbacks, we observe the groundwork laid by Tanya to make Rita’s final days more bearable, whilst experiencing the peculiar realm of the living. Played out within the walls of a damp hospital, Rita’s Last Fairy Tale is an incredibly ambitious film that often fails to gel its sumptuous vignettes with its naturalistic real-world location. 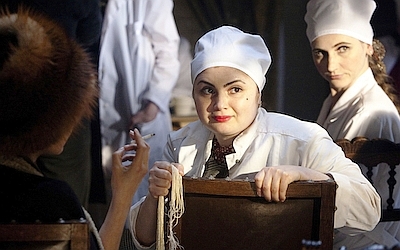 Combining fluctuating aesthetics with a script that struggles to deliver the precise dose of irony it’s visibly proposing,  Litvinova’s latest becomes an arduous viewing experience due to its lack of finesse. It’s a crying shame, as numerous frames from Rita’s Last Fairy Tale could be held up as examples of sublimely fashioned ‘high art’ cinema, each crafted with a delicate attention to detail. The same could also be said of some of the dialogue, the film peppered with numerous hilarious exchanges. However, the manner in which they’re padded out with amateurish set pieces points to a far too forgiving, baggy final edit.

Whilst Litvinova is relatively unknown in the UK, in Russia she’s renowned as somewhat of a matriarch of contemporary culture, a young and vivacious voice in a male-dominated industry. Rita’s Last Fairy Tale clearly benefits from her feminine touch, with the three central characters all well-rounded female protagonists, each with their own endearing qualities and quirky mannerisms. However, her decision to take on the mammoth task of writing, directing and starring in this new vanity project has left little room for the constructive criticism the film sorely needs.

Rita’s Last Fairy Tale is one Russian oddity you’ll desperately want to fall in love with, especially after a remarkable finale that almost compensates for the countless misfires encountered along the way. Litvinova’s film, with its enchanting score, theatrical set designs and playful use of pantomime pomp may be a beautiful mess, but is likely to frustrate more than it pleases.