Cult American director Joe Dante’s classic children’s horror fantasy Gremlins (1984) – rereleased in cinemas this week by Park Circus for a very special digital mini run – holds a very special place in the hearts of children of the 1980s (alongside Flight of the Navigator [1986] and Ghostbusters [1984]), for its darkly comic tale of mischievous little critters who ransack a suburban US town at Christmas. Opening to hopeless inventor Randal (Hoyt Axton) on a paper lantern-lit street in Chinatown, our narrator regales a somewhat twisted and bizarre tale that begins with him searching for a Yuletide gift for his teenage son Billy (an endearing Zach Galligan).

Drawn into a junk shop by a young boy, Randall purchases a Mogwai – an adorable little creature with a penchant for whistling and old movies. He is warned when purchasing the fun-size furball that he must adhere to three rules: “Don’t ever get him wet; keep him away from sunlight; and most important thing, the one thing you must never forget: no matter how much he cries, no matter how much he begs…never, ever feed him after midnight.” When Billy accidentally breaks the most important of these three rules, chaos ensues in the small town of Kingston Falls, with the vindictive offspring of Gizmo – the renamed Mogwai – wreaking havoc upon the residents. 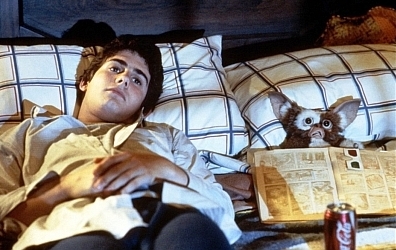 This incredibly fun and unashamedly silly tale was famously produced by 80s goliath Steven Spielberg, who litters longtime friend Dante’s modern fairytale with overt nods to his own titles, including Indiana Jones and E.T. Throughout, there is a delightful amount of intertextuality paying homage to (as well as using footage from) film classics such as Christmas tearjerker It’s A Wonderful Life (1946) and Disney’s Snow White and the Seven Dwarves (1937) (at one point, the maniacal monsters even sing along to cracking out a hilarious rendition of Heigh-Ho). Gremlins’ plethora of in-jokes and pop culture references mean this Yuletide yarn will have you chuckling alongside the twisted antics of the mammalian mischief-makers.

As with Spielberg’s Indiana Jones and the Temple of Doom (1984), Gremlins ran into trouble with the censors for its dark humour and PG gore. Town residents are regularly bumped off by the little eastern demons, which in return are zapped in microwaves and blitzed in blenders. There’s even a macabre, throwaway line about “opening your wrists” at Christmas, and an awkward tale about the death of one character’s father during the festive season. Even Dick Miller’s WWII vet Murray Futterman continually muttering about the perils of imported goods and his harrowing experiences during the Second World War somehow hit the mark in an off-beat manner.

After 28 years, Dante’s Gremlins is still a tremendously witty, quirky 80s children’s classic, that still holds up remarkably well decades later. More importantly, it serves up a timely reminder that Christmas is the perfect time for ghoulish morality tales, and that young audiences shouldn’t be adverse to receiving a chill or two at the cinemas over the winter period.