With a background in television production, Barnaby Southcombe’s Brit-noir adaptation I, Anna (2012) is the director’s first feature. Yet aspects of its style and finished tone display hallmarks of a rather accomplished production, even if the film itself – despite a typically beautiful performance from the wondrous Charlotte Rampling (Southcombe’s mother) – suffers from a wayward plot, seemingly plucked from a stockpile of twisting psychological drama. After a man is found bludgeoned to death in a London apartment block, DCI Bernie Reid (Gabriel Byrne) is first on the scene, but is distracted from his duties by a brief encounter with Anna (Rampling).

Going through the motions of the case, Bernie’s thoughts return to Anna whom he tracks down and follows. When they finally meet at a singles party, the mutual attraction is instant, although Anna has no recollection of Bernie, nor of the night they first met. As Bernie’s professional judgement battles with his desire for intimacy and love, the mystery deep within Anna’s mind finally unravels, revealing a truth too painful to bear. 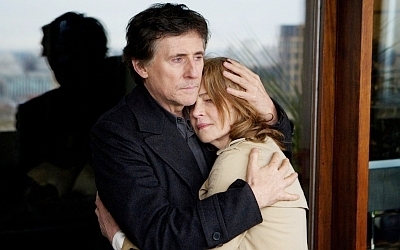 I, Anna’s adapted screenplay, written by Southcombe and based on Elsa Lewin’s American novel of the same name, puts to work the acting prowess of the director’s mother (Rampling) amidst the urban sprawl of the UK capital. Scenes shot in and around the towering concrete of the Barbican provide an ominous visual backdrop that is both reminiscent of classic noir and in keeping with the genre’s contemporary reimagining by Scandinavian novelists and filmmakers. There is a visceral quality to the film, with fearlessly graphic scenes of sex and violence that in many ways provide the outward expression of its protagonists inner turmoil.

Whilst it does really well to establish an effective blend of contemporary noir and classic noir in its tone and atmosphere, there is a notable lack of substance making it feel like a short film that is being dragged out to make a feature. However, its enlightened use of space – or lack thereof – works really well to express the trauma and emotions of its characters, working to establish an empathetic response from its audience who will no doubt feel somewhat trapped and disoriented at times by the film’s visual style and plot.

Overall, I, Anna marks a strong debut effort for Southcombe, and with the likes of Eddie Marsan in the film’s supporting cast in addition to the expert Rampling and Byrne, it does carry some real weight. However, with a few editorial tweaks it could have been much stronger and perhaps would have had the potential to introduce London as a new contender for the capital of noir.