For an artist who has always doggedly avoided any nostalgia, 2012 has been an unusually reflective year for Neil Young. He published his surprisingly serene autobiography and released two records, one of which was made up of covers of the folk standards of his youth. By combining concert footage with sequences of the singer driving around his hometown of Omemee, Academy Award-winning director Jonathan Demme’s film could easily have fallen prey to rose-tinted sentimentality. But Neil Young Journeys (2011) is actually a raucous and enthralling musical portrait of a man who still refuses to bow down to convention.

In 2010, Neil Young released a solo record endearingly titled Le Noise. With the guitars drenched in feedback and reverb, it stands as one of the most innovative and forward-thinking records of his career; brash, eccentric and, indeed, noisy. The concert at the centre of the film takes place in Toronto’s Massey Hall at the end of the promotional tour for the album. By mixing songs from that record with radical reworkings of his back catalogue, the concert material manages to provide an accurate summation of Young’s modus operandi; songs delivered with an energetic and experimental edge, but rooted in traditional country and rock ‘n’ roll. They’re quite simply a joy to behold. 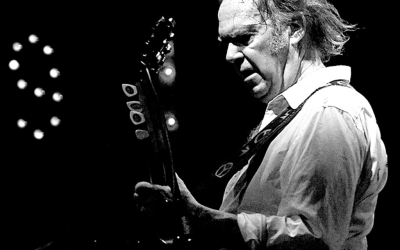 The sections in which Young casually drives around his sleepy hometown are equally enjoyable. Young is a man who faces his past in his own way; without compromise or sentiment. There are no dewy-eyed recollections of lost reveries or past successes here, but there are hilariously outrageous stories of insulting pensioners and incinerating turtles, all told with the same mischievous relish. But concealed beneath these tales of childhood misdeeds is that quiet yearning for a pastoral idyll which is present in many of Young’s very best acoustic songs, from Are You Ready for the Country? through to Harvest Moon. Even Young’s more sonically adventurous excursions have been grounded by this sense of rustic tranquillity.

Like its subject, Neil Young Journeys has a loose and rough-hewed charm. Eschewing the flashy editing of classic concert pictures like Martin Scorsese’s The Last Waltz (1978), Demme’s cameras rarely leave Young’s face, giving the film a remarkably intimate quality, allowing the viewer to focus on every aspect of Young’s performance. Demme has created an effortlessly impressionistic portrait of Young; both celebratory and thoughtful, it’s a film about a master still operating at the peak of his powers, as vital now as he ever was.