Film Review: ‘The Man with the Iron Fists’

Wu-Tang Clan member RZA’s The Man with the Iron Fists (2012) walks a fine line between blank parody and loving homage to the kung fu classics of the 1970s. With the burden of a ‘Quentin Tarantino presents’ moniker front and centre on all of the promotional campaign, Iron Fists follows closely in the Tarantino and Rodriguez style of post-modern ruminations on exploitation and trash cinema, giving them a stylistic visual gloss and cool credibility with some choice quirky casting calls. In fact, the trailer for Iron Fists could have sat quite comfortably with the other pseudo movies titles in Tarantino/Rodriguez’s 2007 Grindhouse double feature.

Debut director RZA has an impressive resume in the field, albeit in a different medium. As founder and impresario of the Wu-Tang Clan, RZA was central to defining the unique sound and style of one of hip-hop’s seminal groups, mashing up stripped down urban beats with quirky samples from a variety of martial arts films, whilst raps consists of musings on street life and kung fu enthused philosophy. This thematic approach to music would find poetic visualisation previously in Jim Jaramusch’s underrated Ghost Dog: The Way of the Samurai (1999) – in which RZA appeared and provided the thumping soundtrack for. 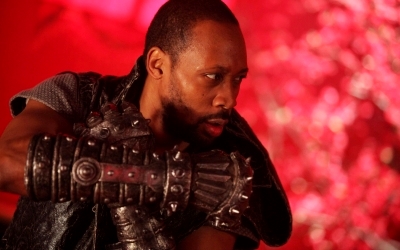 RZA’s long awaited debut martial arts film, Iron Fists is testament to his earnest and sincere appreciation for the genre, a fan-boy given free rein to pour all of his years of cinephile investment into a glossy high budget production. It is totally unsurprising that RZA manages to produce such an unashamedly noisy, moderately entertaining, low-brow affair, which despite the occasional moment of visual virtuosity is completely uninspiring and forgettable. This is all the more disappointing given the quirky setting of a fantasy feudal China, an almost liminal space which seems explicitly presented as a movie set, located somewhere in-between a spaghetti western and a Shaw Brothers set.

This third space has an equally intriguing set of mismatched characters, the gruff machismo of Russell Crowe’s outlaw Jack Knife is never allowed to upstage the array of Asian talent on display. The man himself, complete with bone-crunching iron fists (RZA) sadly comes up short, failing to imbue his character with the necessary gravitas and presence the film so desperately needs – in short, a hero we can identify with. Instead we are left to appreciate the eye candy on offer, be it the blood drenched martial arts choreography itself, or the scantily clad Asian babes who are dishing out the punishment.

Do do we see The Man with the Iron Fists as a mildly distracting homage to kung fu cinema, or as a vile piece of Orientalist garbage which reduces a cultural and generic form into a series of empty stylistic references. Given RZA’s pedigree and background, it would be seem somewhat uncharitable to go for the latter.