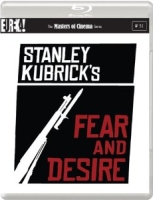 Making its way onto DVD and Blu-ray in a newly restored (circa 2012) form this week courtesy of Eureka’s always excellent Masters of Cinema label, Stanley Kubrick’s little-seen 1953 debut feature Fear and Desire offers a bizarre and intriguing glimpse into the legendary director’s future career. Utilising the backdrop of a fictionalised war between unnamed nations, Kubrick offers up a raw, at times surreal look into the effect of armed conflict upon those caught up in its nihilistic butchery. Though this first inaugural outing varies erratically in quality, its anything but a dull affair and is more than worthy of re-evaluation.

Fear and Desire begins with a slow panning shot of a forested mountainside, offering no real-life comparisons for either context or reference. Amidst the slowly swaying cedars lies a small platoon of four dishevelled soldiers, trapped deep behind enemy lines after their aircraft was forced into a crash landing. With only a nearby river realistically offering any hope of a return to their own faction, the group hatch a daring plan to avoid detection by sailing downstream on a makeshift raft, transporting the squad harmlessly through No Man’s Land and on to salvation. However, as the physical and psychological strain of their situation begins to take hold, each man must grapple with his own sense of duty and moral obligation. 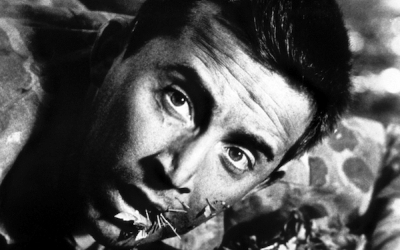 Hamstrung by a friend-and-family-funded budget and an erratic cast of players, Kubrick still manages to lift this Conrad-esque tale above a great deal of its contemporaries. Although obviously displeased with the end result – the filmmaker famously ordered all negatives of the print acquired so as never to be shown – it’s still possible to single out the auteurial tropes that would continue through into one of cinema history’s greatest directorial legacies. Sharply shot in atmospheric monochrome (the long shadows of the interior scenes are a particular highlight), and augmented by expressionistic wipes and fades in the cutting room, Fear and Desire successfully breaks down the barrier between the internal and external as the platoon buckle under the immense pressure.

As ever with any Masters of Cinema release, Fear and Desire is packaged with several excellent special features, including the a collated collection of Kubrick’s earliest shorts (Day of the Flight, Flying Padre and The Seafarers), a new introduction to the main feature from critic Bill Krohn and a detailed booklet featuring several exclusive essays on the works packaged. Though not quite the finished article, Fear and Desire undoubtedly helped lay the foundations for an illustrious filmmaking odyssey.