Seldom do films instil such genuine unease in the viewer as Claustrofobia (2011), a new horror thriller from the Netherlands. The debut outing from Dutch director Bobby Boermans is a tale of twisted vengeance which will make you think twice before having a keypad entry system fitted in your house. Eva (Carolien Spoor) can’t believe her luck when she moves into a trendy apartment for what seems a bargain monthly rent. Who cares that her new neighbours are a bit odd, or that she’s struggling to achieve her goal of becoming an actress – her life has turned a corner, she can feel it. Unfortunately someone very nasty is waiting around that corner with a plan for revenge.

The surprise with Claustrofobia, and a testament to Boermans’ skill as a director, is that real tension is built up early on and sustained throughout the film, despite it actually doing very little. Once it gets down to the nitty gritty of the proceedings, which it does relatively quickly, the story is reasonably simple revolving around a repetitive scenario of capture and escape. However the fact that the film still manages to hold your attention for ninety minutes and provides enough genuine shocks to keep you on the edge of your seat, proves big budgets and even bigger effects don’t necessarily make for effective and memorable horror. 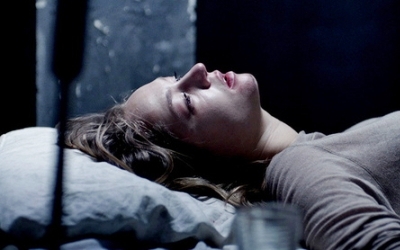 Though it doesn’t take too long to work out just who Eva’s murderous neighbour really is (we’re not quite in Scooby-Doo territory), what said person is really up to will come as more of a surprise when it’s revealed towards the film’s taught finale. The real magic of the Boermans’ debut, however, is the genuinely claustrophobic air which it instils through its utilisation of minimum sets and cast and the aforementioned simplicity of the story’s premise. Taking place virtually within one apartment (with an admittedly warren-like interior) from which the characters seldom leave, either through heir own volition or due to the dictates of others, the viewer is drawn into a frightening world from which there’s no apparent escape.

The very fact that the film’s featured apartment is achingly hip in a minimally futuristic fashion is of little consolation to the victims of the crimes which take place within it. Claustrofobia’s relatively small cast (there are really only four main people central to the plot) also adds to the feeling of sparseness, emphasising the characters sense of removal from the outside world. If this assured horror debut is anything to go by we should expect great things from Boermans.

Claustrofobia is available to own now on DVD. Order from Amazon here.