The Rolling Stones – messianic anti-moss-gatherers or piratical pariahs – how best should they be remembered? American director Brett Morgen (highly regarded for his 2002 cult hit The Kid Stays in the Picture) tackles this historical quandary head-on with Crossfire Hurricane (2012), an evocative, if not quite comprehensive documentary on the now world famous R & B enthusiasts. Sweeping aside the pandering misdemeanours of Martin Scorsese’s Shine a Light (2008), Morgen instead focuses upon the band’s formative years, from their cover-heavy debut album and raucous initial live shows to their jet-setting, circus-like world tours.

Consisting of almost 100% archive footage, Morgen has constructed an editor’s wet dream – a film so immersed in the closeted actuality of what took place, circa 1963-1975, that it sometimes forgets the bigger socio-political picture (Civil Rights Movement stock clips aside). Crossfire Hurricane is undeniably skewed to present its four surviving players as free-and-easy rock royalty, with iconoclastic frontman Mick Jagger receiving a producer credit for the active role he played in getting the film off the ground. Thankfully, such inherent favouritism doesn’t ultimately tarnish what is a largely enjoyable, drug-addled rock ‘n’ roll odyssey through The Stones’ decadent heyday. 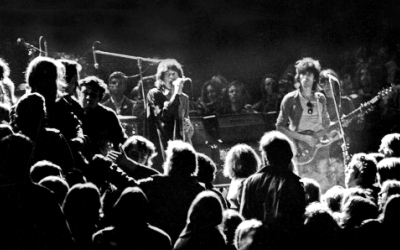 Structured around a series of lengthy interviews conducted by Morgen with Jagger, Keith Richards, Ronnie Wood, Charlie Watts and a small handful of former band members, the director and his team of trusted editors have put together a spellbinding collage of the world’s most infamous rock group, with only the choicest cuts finally making its way into the relatively tight, 120 minute-long end product. Other docs may have successfully explored singular tours or shows (such as the Maysles brothers’ 1970 effort Gimme Shelter, based around the cataclysmic free Altamont show), but never before has there been such a brazen, bold attempt to make a near-all-encompassing all-rounder.

There are niggling omissions – this is very much the rise of The Rolling Stones rather than the genesis, and there are only passing mentions to Mick and Keith’s differing backgrounds and the early London touring days on the jazz club circuit. The late Brian Jones, found dead in a swimming pool on the eve of a sold-out Hyde Park concert in 1969, is one-dimensionally drawn as a demon-plagued eccentric rather than the musical force behind some of The Stones’ greatest ever works. In addition, the women who played a crucial, formative part in the band – whether musically, sexually or, in many cases, both – are notable by their stark absence. Marianne Faithfull appears briefly in several shots, but the fairer sex remains strangely distant and untouchable throughout.

Despite a light dusting of many of the same minor flaws that also befell Kevin MacDonald’s well-received Marley (2012), Morgen’s Crossfire Hurricane remains an alluring, intoxicating creature, a mesmeric ode to a collection of chain-smoking, substance-abusing rapscallions that took on the law, the establishment and the fragility of their own bodies and minds, whilst living long enough to tell the tale. What better way to celebrate The Stones’ 50th anniversary.