Will Ferrell’s continuing audience draw is bolstered by the presence of portly favourite Zach Galifianakis (The Hangover, Due Date) in Jay Roach’s timely political comedy, The Campaign (2012). Unfortunately, this pairing isn’t a straightforward recipe for comedic success, with much of the film relying heavily on stock-humour that could have been lifted straight out of any successful parody of the last ten years. Ferrell plays Democrat congressman Cam Brady, who’s womanising and abuse of the system has become an embarrassment, whilst recent antics in the public eye have made him a party liability.

Consequently, the Motch brothers – two local businessmen with a major stake in the outcome of the election, played by John Lithgow and Dan Aykroyd – make the bold move of recruiting Marty Huggins (Galifianakis), the son of a Republican hero, to run against Brady as their mouthpiece for establishing hugely unpopular, but financially beneficial (for them at least) policies within the region. The ensuing race between Brady – a stalwart of playing the political game (kissing babies etc.) – and Huggins – until now, the town’s local anorak and tour guide – is a destructive and self-absorbed affair, with Brady consistently making a mockery of himself, whilst the possibility of success changes the once placid and family consumed Marty. 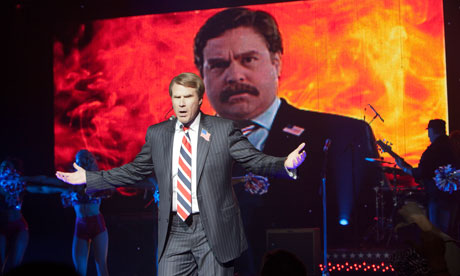 Roach’s The Campaign could, and perhaps should have been a lot funnier that it turns out to be, given its rich subject matter. Both Ferrell and Galifianakis are, at times, humorous in their caricatured roles, yet the timeliness of the movie – what with America’s recent presidential election which, in itself, produced more laugh-out-loud moments than Roach’s effort – certainly should have meant an easy victory for this satirical farce, which is anything but a secure triumph. Somewhere along the way, the filmmakers seem to have lost sight of their comedy’s significant potential to make light of current affairs – albeit, in a low-brow, goofball fashion – and instead chose to favour easy, obvious laughs out of the Acme stockpile.

Despite its failings, there are some memorable moments, and the spinning-on-its-head of the Democrat/Republican dichotomy – where Republicans, particularly in recent years, seem to be the butt of the joke – makes for some hilarious satire. Ferrell’s alpha-male showboating, contrasted by Galifianakis’ effeminate, family-oriented, and all round nice guy, provides a dynamic that does, at times, raise a wry smile. Ultimately however, where the jokes has the potential to make a mockery of the outright comedy provided by last year’s Presidential election, Roach’s The Campaign too often chooses to opt for disappointing, slapstick tomfoolery.

Win a Blu-ray copy of The Campaign with our latest competition. Follow this link to enter.