There’s much to praise in director Ole Bornedal’s competent, if run-of-the-mill, excursion into child-in-peril territory. Reminiscent of the daddy of all devil films, The Exorcist (1973), and starring Jeffrey Dean Morgan, Kyra Sedgwick and the outstanding Natasha Calis, The Possession (2012) does suffer, however, due to the fact that we’ve seen it all before. Em (Calis) persuades her father Clyde (Dean Morgan) to buy her an antique box she finds at a yard sale. Unfortunately, Clyde and his ex-wife Stephanie (Sedgwick) soon discover that the box is home to an ancient demon, which is determined to resurrect itself through Em. 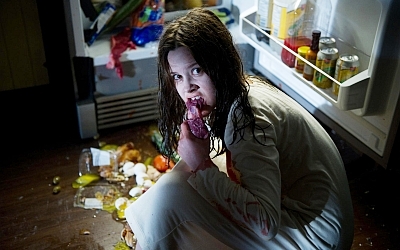 The Possession thankfully forgoes the temptation to pile on gore – which, considering its producer is the legendary master of schlock Sam Raimi, is no mean feat. Instead, it attempts to invoke a feeling of unease through characterisation (a refreshing approach for this type of film), periodically interspersed with surprisingly realistic shock effects. One scene, involving Em whilst she is preparing for bed one night, is particularly effective – if the thought of sticking your fingers down your throat is enough to make you gag then you ought to push the fast forward button at this point. Time is also given to the characters to flesh them out, serving to make you feel for the family and the terrifying situation they find themselves in.

What’s more, Bornedal’s horror looks stunning, set amidst the leafy environs of nameless, middle-class America. Everything from the Good Housekeeping-esque interior of Stephanie’s home, to the surrounding manicured lawns and pristine suburban streets, create the perfect backdrop for the story to play out against, only serving to heighten the horrors of the ancient evil when it unleashes its full wrath. In terms of the cast, the film belongs to Calis, the precociously talented child actress whose performance here as the the young girl whose innocence is defiled by the demon, gives Linda Blair’s Megan from The Exorcist a run for her money.

The Possession’s basic plot, revolving around a family’s attempts to cope with an evil which they have inadvertently woken, is as old as the devil himself. There are a few loose ends left untied – namely the demise or otherwise of Stephanie’s insipid yet harmless new boyfriend Brett (Grant Show) – though they’re soon forgotten as you are caught up in the full-on climax. Bornedal may not have pushed the boundaries of modern horror, but he’s nevertheless produced a watchable chiller which effectively invokes the spirit of past demonic possession classics.